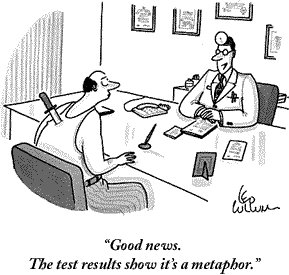 For anyone who’s watched any US television show starring anyone under the age of 25, or stepped inside a school, or just has, like kids, they’ll know that as a teacher the word I hear most often is, like, “like.”

I’ve tried banning it in my lessons, but to no avail. One child today was actually struck dumb, not knowing how to begin her sentence without the comfort-blanket of this ubiquitous preface.

Perhaps it is reading too much into it, but I wonder if the necessity to append ‘like’ to anything said is actually a statement about teenage reality: everything is metaphor. Nothing actually is; things are only like things.

In my experience of the dynamics of school-age friendships, this is perhaps unsurprising. Peer pressure is a powerful thing, and so to screen one’s reality with a series of, like, metaphors is a strategy that still permits opinions to be given, but allows a defence if those opinions prove unpopular in the group. ‘I didn’t really think that, I just thought it was like something…’

As we head into the second of the leadership debates this evening, I wonder if we will see similar bluffs being erected, language barriers being thrown up to convince the listener that something is being said, while preventing the speaker from being held to these opinions or promises if grilled about them later.

Life is so fluid now. With myriad connections, virtual and ‘real’, the job of negotiating who we are and what opinions we should have and hold to is far more complex than it once was. Perhaps – and you’ll notice my get-out clause in using that word often – life as, like, metaphor, is our best strategy for continuing to get along with as many people as possible. Whether or not that will produce a good leader for this country is another matter entirely.