Alongside the piece on Alan Turing, I also have another short article in Third Way this month as part of their ‘icon of the month’ series. Following the much-feted launch of the iPad, it’s about Apple.

Apple are an increasingly intriguing company. They are a huge multinational – bigger than Sony or Samsung – yet constantly define themselves as the trendy outsiders, in opposition to the fat hulking mass that is Microsoft. As Steve Jobs said recently (thanks to Tomal Price for sending me the quote) ‘why join the navy when you can be a pirate?‘

I’d argue that Apple are much closer to being navy boys than anyone would like to admit, and that the ‘outsider’ image is simply a clever piece of corporate spin to make people feel edgy and excited.

In the article I try to look a bit at Apple via the history of their logo. For Apple, this logo-come-halo is all-important. Subtly adorning every product, the Apple device has naturally undergone a transformation in parallel to the corporate image that they want to project. The original logo was an etching of Newton sitting under a tree: nerdy, earnest and complex:

This evolved into the rainbow shades of a bitten apple – which Jobs thought would present a friendly image: the computer as helper. 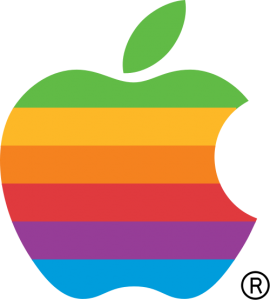 Now the colours have gone, and all is flattened. Thin, sensual, intelligently simple, sleek… The logos speaks clearly, and we see our own values mirrored in the shiny new surfaces it decorates.

Jobs is clear, the bite on the Apple logo was to stop it looking like an orange. But this particular fruit has always been rich in meaning. The bitten apple is the birth of knowledge and the end of innocence, perhaps even the birth of the ‘i’.

Yet it is also the beginning of something remarkable, and one cannot fail to be caught up in the technologically optimistic world that Jobs presents to the faithful: everything will be alright. He has created, and from the chaos of the modern digital life, he wants us to see that what he has made for us is good.

This is what Apple do so very well: they sell us our desires. Like the icons of old, we will gaze into our iPads wanting solace and communion and equilibrium and connection. What exactly they will offer us is, as yet, unknown, but without disappointment there will be no more demand.

So while few have actually put their hands on one yet, we can guarantee one thing about gazing into the dark glass of the iPad: after the initial rush, it will be disappointing. It won’t heal us.