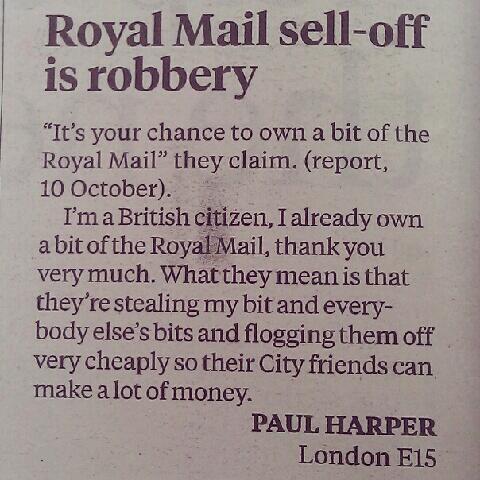 Quite a few news outlets have been covering the news that Twitter is to be floated on the stock market today, with a valuation of $18bn. Shares will be offered at around $26.

A couple of these recent flotations – I’m thinking of Facebook and, in the UK, the Royal Mail – have given me pause for thought at the economic models that underpin them. In short, I think that they stink. Why? Because they miss a chance to have the stake-holders investing in the company as shareholders, opting instead for large financial corporations as investors, who have just one single motive: profit.

The letter above makes the point very nicely: as a state-owned business the Royal Mail was partly owned by me. Now it is owned by a bunch of City financiers. Somehow, my stake in wanting that business to succeed has withered.

Which brings us to Twitter. What could possibly make it worth $18bn? The answer is bloody obvious: you do, or at least, those of you who ‘tweet.’ It is entirely your content that generates that wealth. Nobody goes to Twitter to find something to buy; the ad revenues upon which the service rely as its sole income stream are 100% dependent on the traffic generated by users, who offer their tweets for free. It leaves a rather bitter taste to realise that people are going to go all out to make money out of it.

This isn’t a ‘fringe’ opinion. Technology writer and expert Stephen Johnson wrote in Wired in 2012:

‘with Facebook we are ultimately just tenant farmers on the land; we make it more productive with our labor, but the ground belongs to someone else.’

The sociologist and technology writer Geert Lovink goes further in Networks Without a Cause – probably the first serious critique of social media:

‘We are honoured to be invited by “the Machine” to submit our opinions and preferences. We give in to the pressure to categorize data and join the swarms of ‘collective intelligence.’ Donate your wisdom to the crowds. We are invited to create reading lists, rank music and evaluate the products we consumed. User bees working for queen Google. It is so tempting to become part of the online ‘pollination’ world, as French economist Yann Moulier coined it, with billions of users acting like bees that fly from one website to the other, adding value for the owners.’

Facebook advertises itself as ‘free – and it always will be,’ and Twitter is also a free service. But the price we pay for this freedom is advertising – the interruption of our visual space, the mining of our content for patterns to be used to target us precisely. In other words, the ‘free’ aspect is only about upfront monetary cost; ‘freedom’ – by which we might include privacy – is not on the agenda.

Are there any alternatives though?

I think there are. I would love to have seen Twitter move to becoming a collective or cooperative of sorts, with each user gaining a stake of the business proportional to the relative clout of their content. This would at least mean that those who were generating the content upon which ad revenues were made had a stake in those profits. Alternatively, I for one would be perfectly happy to pay a small subscription to use Twitter, in return for no ads.

I seems that we are blinkered, that in a world with such technological creativity there is such economic stagnation. The same old models being used for the benefit of the same people, over and over. I’ll keep tweeting, I expect. But after today I’ll do so with a little more irritation at the economics that supports the service, and a little more hope that some pirate somewhere might come up with a mutinous alternative. 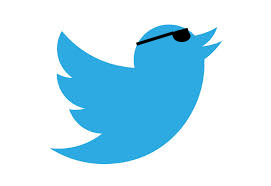