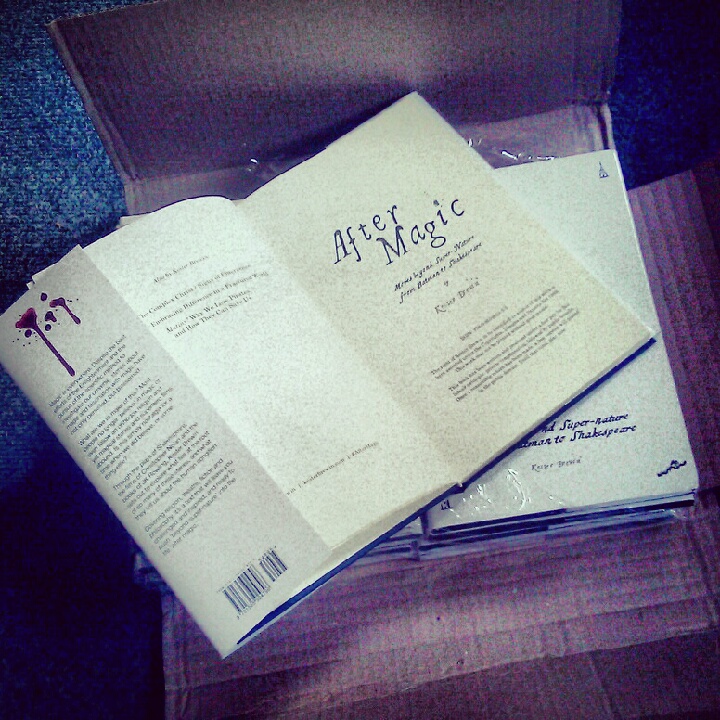 The blanks for the After Magic hardbacks to be hand-inked arrived today, and I’ve got to say I’m really excited about them. They’ve come out really really well… Will be doing the printing onto the covers this weekend and begin sending them out on Monday all being well. There’s a small number still available for purchase – and I’m planning to have some at Subverting the Norm too – so get your orders in soon if you want one – when they’re gone they’ll be gone!

To order from US  or UK follow buttons at bottom of page [ here ].

All editions can be found here.

I’ve given some reasons in previous posts for why I think you should read it – and the reviews so far have been really pleasing… So how about a few reasons why may not want to?!

After Magic screws with those categorisations. ‘Dirt,’ as I’ve explored in previous works, is ‘matter out of place.’ And in this book I very deliberate bring some dirt onto the scene by allowing Shakespeare, JK Rowling and Christopher Nolan a theological voice. If you’re of the opinion that it’s sola scriptura then please don’t read this book. It’s filthy, and refuses to be passed off with an excuse of ‘pop’ either. So please, if you want your theology clean and comfortable, don’t sully your fingers with this little piece of shit. Secondly, don’t read After Magic if you hear no evil, or see no evil, nor speak no evil. If you think religion really does work, and really it’s been fine that it’s variously supported slavery, put women down and denied so many groups rights, then you’re in the wrong place. If you think that people who believe they hear God speak and then go out bombing are normal, or would love to allow gay marriage but, damn it the Bible says ‘Adam and Eve not Adam and Steve’ so, sorry, nothing you can do about it, then don’t read this. Your blood pressure might not take it.

If, on the other hand, you think that there is a beauty at the heart of great art and literature that continues to speak to the best part of what it means to be human, and if you think that perhaps, just perhaps God became human for good reason, or if you’re fed up of the absurd sides of this faith you’ve inherited, but aren’t prepared to simply throw the whole thing away to join Dawkins… Well, perhaps you should read it. And if you have a heart for Shakespeare or Batman or good movies, then you really really should.

Plus it’d make me happy. And people really should make teachers happy more often. YOU’RE MAKING CHILDREN SUFFER IF YOU DON’T! Seriously though – this is a book I’m very proud of, which I know has some gems in it. So go buy, steal or borrow* it right now. The sooner you do, the sooner you can start living After Magic, which is a very fine place to be – especially with Easter coming.

* If you steal it, don’t get caught, and Paypal me a few bucks.