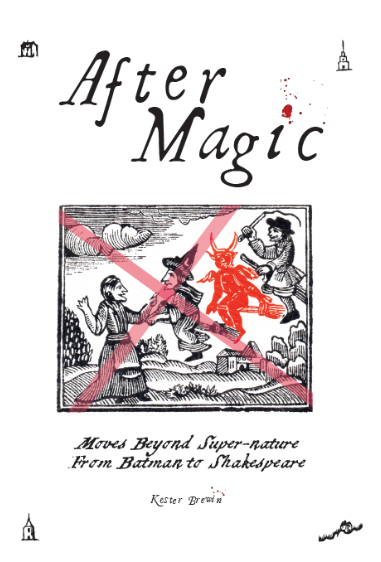 After Magic will be available in the next couple of weeks. It’s a book I’m genuinely excited about sharing, containing as it does what I think is the most clear expression of my thinking.

So what is the book about? Firstly, through a number of plays, books and films it explores the archetype of the hero who renounces their magical power. Here’s a snippet from the introduction:

I want to propose that these long-lasting magical stories plot out something of what it means to engage with the supernatural. In consequence, they also plot out how this supernatural engagement has affected the journey we as human beings have taken as we have come to understand both our world and our relationships with one another.

Most importantly, I contend that the most enduring of these tales – the ones that go beyond familiarity and into archetype – all share a common strand as they come to fulfilment: they all contain a move beyond super-nature, a renunciation of magic in favour of something greater. It is by these stories that we will be helped to navigate our way in the world ‘after magic.’

Why is this important?

Dostoyevsky famously pronounced that ‘if God does not exist, everything becomes permissible.’ Modern thinkers have turned this on its head and seen that the ‘infinite demand’ of the existence of a transcendent God can – and has been – used as a way of justifying inhuman behaviour, giving divine assent to violence and the bloody exercise of power. Dostoyevsky’s formulation is thus inverted by recent philosophers to something like ‘with God everything is justifiable.’

In other words, the infinite demand of the very existence of God has such a gravity that it diminishes our humanity. This presents a paradox which I express like this:

It turns out that the most godly thing one can do is to act as if god does not exist.

My argument in the book is that we see Jesus tackle this problem of the infinite demand head on in his life and death, and ultimately through the ‘trick of non-existence.’ But there are other demands too, placed on us not by religion, but any ‘big other’ such as a large corporation, the system of capitalism or even the internet. So the lessons we learn in living ‘after magic’ are not simply about how to solve the problem of the infinite demand of religion, but of the ‘very-large-but-non-infinite‘ demands placed on us by other systems too. In this way Christianity becomes not a personal salvation by an infinite God, but a salvation from all infinite and large demands – a way of stepping out from the madness that they bring and the violence that they perpetuate.

Really hope you enjoy engaging with it. News on publication date imminent.