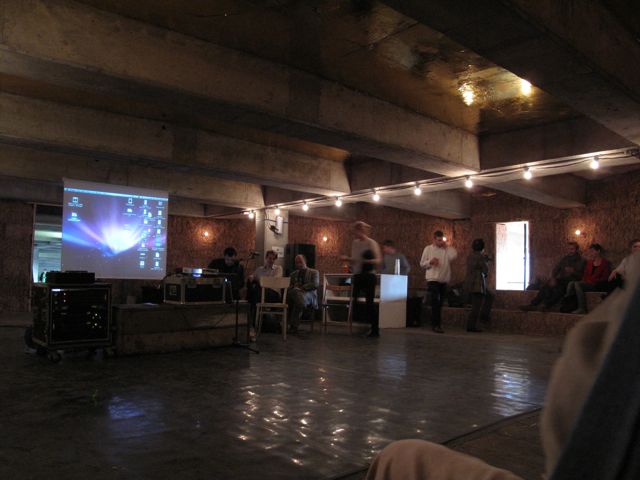 I ended up on the 7th floor of a multi-story car park in Peckham this evening, at an event hosted by Bold Tendencies, which looked at the car parks from an architectural and anthropological point of view.

One contributor made the point that the problem of car parking only became such as Henry Ford developed his production line techniques to make the Model T: there were suddenly so many of the damn things coming out of the factory gates every day that it became a nightmare working out where to put them all.

I think this throws up some interesting points. Firstly, if I say I’m going to a park, there’s an inherent idea of freedom and movement within a city context. A park is an open space, where we have a wider and more open horizon. But a car park is precisely opposite to this. Cars are sold to us as objects that give us masses of freedom – think of all the ads with uncluttered open roads – and yet in a car park we find them castrated and motionless: the car park is a place to store objects that are redundant. The ceilings are low and dark, the space reduced in order to pack more vehicles in.

We mostly use car parks when we travel in to city centres for shopping. So the car park – this problem space created by the economics of mass production, is the place where we go in order to consume and transport back more and more stuff, all of which has been sold to us via the same message that it will bring us more freedom and self-worth.

I think this is why car parks, no matter how well dressed up, are inherently depressing places: they are where the consumer dream hits the concrete buffers. All these things that have promised so much, transported in cars that cocoon us in leather and conditioned air… and here we are on level 4, underground, trying to find the right change, the smell of piss burning in the stairwell.