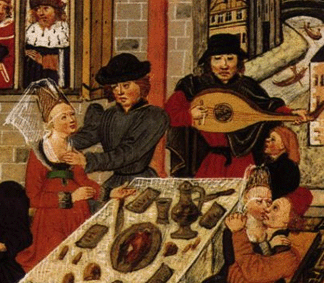 As part of the book I’m writing at the moment I’ve been reading and thinking quite a lot about the idea of what ‘property’ is, and how this relates to the arts – and music in particular.

Just the other day a new legal ruling was passed that ensured that ageing crooners like Sir Cliff Richard can still claim royalties for songs they recorded (not actually wrote) for 70 years. Cliff and others have been campaigning for this for some time, though some of their responses ring a little hollow for those of us who’ve done a little more work than Mick Jagger:

“Obviously the record business is not what it was, so people don’t earn as much as they used to. [The royalties] can extend their lives and the lives of their families who inherit their songs.”

Others have been far more skeptical, arguing that the ruling will only benefit the very few – like Jagger and Richards – and could serve to stifle freedom of expression, with older works remaining in copyright for so much longer.

Here’s my question – which I mean very genuinely, and would love to hear opinions from people who know better than I: to what extent should musicians get paid?

The historical stuff I’m reading paints perhaps very different picture of musicianship from that we see in Jagger and Richards. In the pre-recording era, it was impossible to ‘own’ a song in the way it is now. A song was not your property. Indeed, most musicians, from what I can gather, played variations on standards that they had inherited from other musicians – and thus existed by very much drawing on the open pool of song knowledge that existed in communities.

That pool has been enclosed and privatised, and musicians – from what Jagger is saying – should now expect to have their careers in music pay well into old age. Clearly, without investment so much musical innovation would not have been possible. But is it really right for songs to remain ‘owned’ by song-writers in perpetuity?

My hunch is that what the digital music revolution may have precipitated is a partial return towards the historic pattern: musicians making money through performance. I personally think they – and other artists – should have a right to be paid for their work, but that very long copyrights are, in the end, unhelpful. But I’d be really interested to know what others who may be in the business think about it, because I’m really not sure I’m right.

(PS – congrats to Iain Archer for having one of his songs as the opening track on the current UK number 1 album! He should be paid. Forever 😉 )