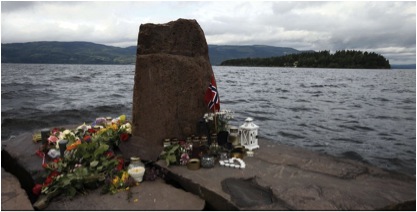 I’ve resisted commenting too quickly on the tragedy that’s unfolded in Norway. I think sometimes we need to hold back from immediately pushing views into a space that should simply be reserved for grief and self-examination. But as the nation of Norway itself begins to process what’s happened, I wanted to offer a couple of thoughts.

Firstly, a warning: another Anders Behring Breivik is coming. They are already planning, stockpiling and fantasising. More people are going to die in a horrible attack, and more people are going to have to grieve lives cut short by high calibre bullets from automatic weapons. This, I’m afraid, is what we can expect if we are to pursue a world that embraces ‘the other.’

Breivik’s hatred, the entirety of his actions, were fuelled by a rejection of an emerging Norway that included people from different backgrounds. Muslims, Somali immigrants… it doesn’t matter who they are really, simply that they are different and are seen by Breivik as contaminating the purity of Norway.

He has a utopian view of Norway, and as I have written in Other, this must lead to violence if it is to be sustained. I quoted Anthony Dworkin, who writes of utopians that:

‘their guiding inspiration is that conflict and coercion can be finessed away by a correct reordering of society… but they cannot fulfil their objectives without attempting to remake human nature, or eliminate groups within society that are seen as agents of corruption or reaction… The real harm came in the 20th Century, when utopians abandoned the idea of withdrawing from the world and instead attempted to remake it.’

Al Qaeda, the far right, Zionists, the British National Party – they are all the same. They have a view of a ‘clean’ world which is not contaminated by ‘the other’ – whoever that may be. They thus have two options: to either withdraw into bounded, closed utopian communities, which they end up having to defend (like Waco) or to go out on crusades and attempt to cleanse the world through acts of violence.

The question we must face is: what will our response be? Unfortunately there will be those who will decide that the best form of defence is attack, and that we must increase security even more, and increase powers to stop and search and encourage people to inform on one another if they suspect they are acting in an ‘un-American’ or ‘un-Wherever’ way. And we must sift through society and violently root out extremism wherever we find it.

Instead, we must re-double our efforts to love the other. This is not a blind and foolish love, for it needs to be sensitive to the difficulties people feel when faced with change and difference. Multiculturalism is a far more complex project than liberal elites have assumed. We need to work with people, especially within working class, blue-collar communities who see their jobs under threat and their housing being taken. We need, all of us, to better understand our common humanity, and offer places – TAZ spaces if you will – where people can meet and feast together.

I think it’s really interesting that the mass response from the people of Norway has been a ‘march of the roses.’ Flowers that have always represented love. Would this have been the response in the US or the UK? I wonder.

Perhaps through this tragedy Norway can teach us something about how to respond when hatred boils over into violence. For we know it will happen again. And again. And we need to be ready. Perhaps not with guns, but with roses.