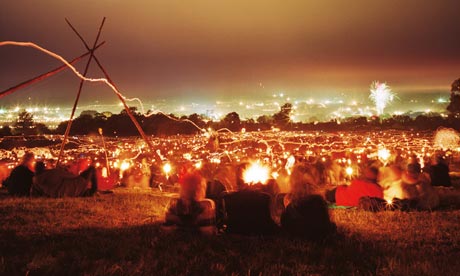 Interesting piece in The Independent yesterday, asking why people bother going to festivals when the sound quality is crap, there’s mud everywhere, you can’t sleep, and people push and spill beer all over you.

I visited Glastonbury once, many years ago now, and left utterly mystified. Why, I wondered at the time, did so many people feel, and with such obvious sincerity, that the music they loved would be enhanced by a pervasive smell of excrement and kebabs? Why was it thought to be an advantage to sit on a carpet of compressed garbage and observe one’s heroes from a distance at which they were virtually invisible?

This is a good question. Despite the great TV coverage, there is a part of me that still feels jealous of those who are actually there. And that’s, I think why, despite slightly depressed numbers this year, people will continue to go to festivals, especially in a digital age.

Why? Well, I’ve written more fully about the importance of festive, carnival spaces in Other. Glastonbury is (or can be – outside of the uber-commercial aspects) a TAZ. It is a place ‘penetrated by the marvellous’ – and exists for a short time only, but in that short time it re-frames us. Festivals are also dirty spaces. The fact that you don’t wash much and change your hygiene and sleep boundaries again force us to engage with otherness, and feel restored because of it.

But there’s also the indescribable sense of presence at festivals. You are THERE. And you are there together. And no matter how good your 3D TV and surround sound system, you won’t feel that unless you really are prepared to get down and dirty and be in the crowd. And that’s the sad thing about so much technology – it wants to replicate this sense of ‘togetherness’ but without the dirt. It wants us to be ‘in the action’ – at a football match or festival – but in a sterilised, mediated environment. And that’s just never going to cut it.

Which is why, after much thought, I had to be at Wild Goose. Where I won’t be blogging or tweeting much, just getting filthy and being with people, even if the sound quality is crap.