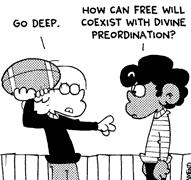 Very good episode of In Our Time this week, which looked at free will. 50 mins or so – and very well worthwhile listening to, especially in the context of the debate on heaven and hell which is still rumbling around the publication of Rob Bell’s new book, Love Wins.

There are serious problems on both side of the free will / determinism argument. If the universe is truly deterministic then we really have no way of holding people responsible for their actions – they are simply responding to a set of initial universal conditions of which they had no control. But if we assume we have free will, then we need to work out where that comes from, and what that might mean in a quantum universe too.

This philosophical debate gets right to the heart of some of the problems of heaven and hell. If the bible is to be believed, then we have free will – or God would simply not be right to judge, because our fate would have been pre-determined. But the bible also wants us to accept that God has predestined a certain (small) number of people to be saved – and that there’s nothing we can do to change his [sic] mind.

These arguments can be nuanced in lots of ways,but what was refreshing about the In Our Time piece was the reference to Peter Strawson’s work Freedom and Resentment (appended below). As Strawson’s son (also a philsopher) explained, F&R turned the debate about free will on its head somewhat:

If we turn things round, if gratitude and resentment require a universe with free will, then given that we live in a universe within which we want to be grateful, and we find we need people to blame because these are primitive and at the heart of our humanity, we instinctively live as if we had free will whether or not we actually do.

Thus, the debate over free will may as well be closed: we need to live as if we have it.

This could be boiled down in the negative form to the aphorism ‘we are forced to live as if we are free’ – which I think applies beautifully to both over-arching consumer capitalism and evangelical Christianity.

But perhaps we can push this further. If our humanity pushes us to live as if there were free will – even if there might not be (which is, as the programme explains, proveably unproveable) – then perhaps we project the consequences of these free actions into places of judgement.

In other words: we cannot prove if heaven and hell exist, but it’s a natural response to want the world to be fair, to be sorted out and judged at some point so that justice is done. A deterministic universe it might be – just chemicals and electrons – but this is not a world that we find ‘human’ precisely because it makes a nonsense of ideas of love – and hate too.