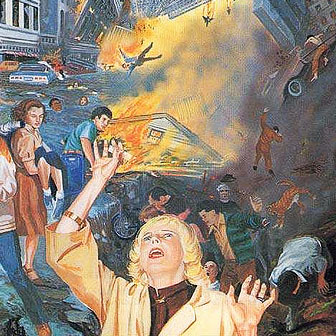 In the previous post I ended with some thoughts about the options that utopian communities have when they have established a new purified space: they can either defend their space to stop dirt getting in, or move out from that space to try to purify the dirty badlands that lie outside. The first instinct is that of the Puritans or monastics, the second that of the Crusaders. One could argue that the defensive violence of the first instinct is less dangerous than the proactive violence of the second – and writers like Anthony Dworkin have noted that:

‘the real harm came in the 20th Century, when utopians abandoned the idea of withdrawing from the world and instead attempted to remake it’.

The premise of the utopian instinct appears to be that of the dream of returning to Eden: if we can just achieve that totally purified state – no matter what violence or separation we have to subject people to in order to reach it – then nothing will ever infect it again. Hence we come to the title of the series: the violent imagery surrounding the establishment of ‘heaven.’ As we read in Revelation 19:

I saw heaven standing open and there before me was a white horse, whose rider is called Faithful and True. With justice he judges and makes war. His eyes are like blazing fire, and on his head are many crowns. He has a name written on him that no one knows but he himself. He is dressed in a robe dipped in blood, and his name is the Word of God. The armies of heaven were following him, riding on white horses and dressed in fine linen, white and clean. Out of his mouth comes a sharp sword with which to strike down the nations. “He will rule them with an iron scepter.” He treads the winepress of the fury of the wrath of God Almighty. On his robe and on his thigh he has this name written:

KING OF KINGS AND LORD OF LORDS.

And I saw an angel standing in the sun, who cried in a loud voice to all the birds flying in midair, “Come, gather together for the great supper of God, so that you may eat the flesh of kings, generals, and mighty men, of horses and their riders, and the flesh of all people, free and slave, small and great.”

Then I saw the beast and the kings of the earth and their armies gathered together to make war against the rider on the horse and his army. But the beast was captured, and with him the false prophet who had performed the miraculous signs on his behalf. With these signs he had deluded those who had received the mark of the beast and worshiped his image. The two of them were thrown alive into the fiery lake of burning sulfur. The rest of them were killed with the sword that came out of the mouth of the rider on the horse, and all the birds gorged themselves on their flesh.

When heaven is established, it will be a bloody business. What are we to make of this violent imagery? Even if we are not to take it literally, I think its ethos has infected our theological thinking, and left us with a legacy of violent metaphors of separation when we come to think of heaven – the establishment of the Divine Utopia.

I think this is profoundly different from the mood we get when Jesus talks about the Kingdom. And it’s to the very different mode of thinking about purified spaces that we’ll turn to next.