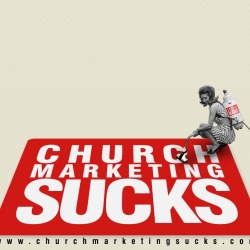 A very interesting post popped up on the theology site ‘An Und Fur Sich’ yesterday, which was a quick critique posted by Brad Johnson, after his investigation into the movement prompted by ‘a mixture of morbid and genuine curiosity.’ His single perspective was to read Pete Rollins’ books, and his comments spring basically out of that, but the most interesting aspect was his opening remark that:

The Emergent Church is a marketing phenomenon – a means of remaining “hip” and “edgy,” – and thus essentially another form of evangelistic seeker-sensitivity.

Johnson goes on to say:

For [the Emerging Church] it is well and good to question and/or doubt the faith, because these questions and doubts can be shown ultimately to affirm Christianity. […] This, it seems to me, is the strongest form of marketability: when even the aversion to marketability (e.g., self-deprecation) is itself a strongly ironic form of pure marketability.

A couple of things I’d like to point out in response to this. Firstly, Johnson titled his post ‘Giving the Emergent Church its Due,’ but I think given the limited scope of his reading and research, he has not done anything like this.

Secondly though, I think he is a) complete right and b) completely wrong.

He is completely right in that much of what carries the label ’emerging church’ is a straightforward marketing ploy by churches who are simply keen to attract younger members without actually changing the core of their beliefs or practices.

However, he is also completely wrong, in that the manifestations of ’emerging church’ that have become the popular face of the movement are, I believe a distorted simulacrum of the much more radical theological model that Pete (and others) have been writing about.

This presents a problem: if the practice is never going to live up to the theory, which is at fault?

Finally, I think Johnson, though right to identify the marketing phenomenon, doesn’t do enough to argue that this is a particularly ’emerging church’ problem. Personally, I think we are so heavily steeped in consumer capitalism that any attempt at change or re-formation is going to be afflicted by a marketing mindset (check this site out, for an example of the double-bind). Which is why my thinking for a possible next book is veering towards a synthesis of the twin failures of Communism and Christianity. It’s only out of the ashes of both that I think we might see a genuinely different movement.