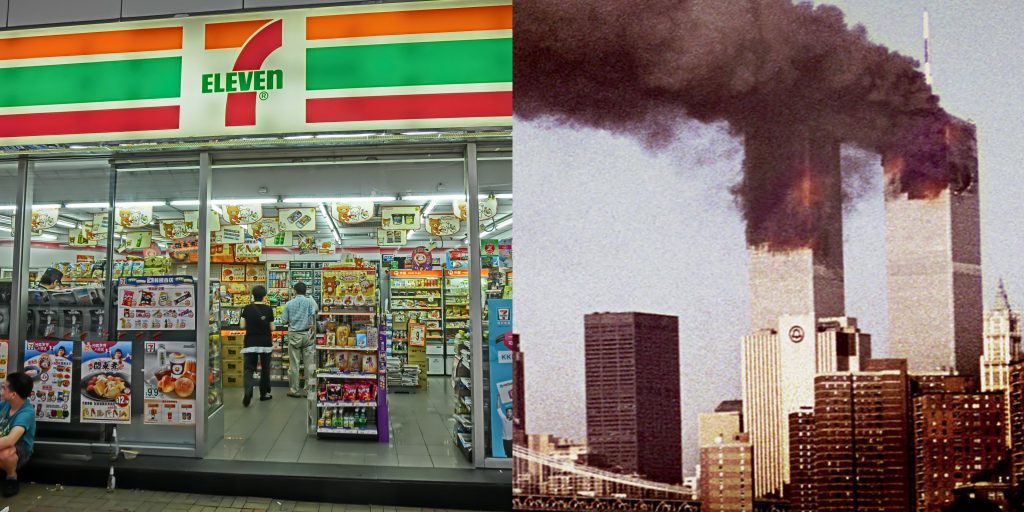 Today I overheard two people talking, one of whom seemed to be (not the first time I’d heard this) conflating 7-Eleven and 9/11. ‘Wait,’ she said when brought up on this. ‘They’re not the same thing?’
No. One is a chain of convenience stores, the other a major terrorist attack and one of the defining moments of the past 100 years. But you can see why the confusion.
‘So it was in the 18th century, right,’ she continued. ‘In Europe?’
Others gasped, but she had her defence ready: ‘it’s not my fault, I didn’t get taught this stuff.’

It was a short interaction, less than a minute, but in the all the fog of discussion about our ‘post truth’ era it struck me as significant. What is interesting is this: the field of this person seemed to be reduced to one that encompassed only their own experience. From what she said, she wasn’t alive at the time of 9/11 (yes, it’s that long ago), and given that it was just this fraction into the past world that existed before she did, it then dropped off into an opaque abyss:

Not in SE London… So… Europe, North America?

One of the ways that the post-truth move is made is, it seems to me, is via the radical localisation of experience. In a vast world of always on media, of near-infinite channels of communication, and all of this framed in what I’m told is a ‘global village,’ the way I deal with this is by retreat into a carefully filtered cocoon. We narrow down all of what is available into a drip feed of what we can cope with: news from friends, memes, stuff we should buy.

In the world of ‘old media,’ the bandwidth of information was not so great. This meant that our exposure was less intense, but that also meant that we did have the headspace to make room for events outside of our narrow experience: significant daily news, for example, plus analysis of recent history. Don’t forget, 9/11 was in a pre-social-media age. It was a different world. No one could Tweet about it. No one could update their Facebook to say they were safe, because Facebook didn’t exist until three years later.

The question we have to ask ourselves is how we can stop ourselves similarly becoming mute to what is important, rather than deafened by whatever is going viral. More importantly, how can we help those in generations below us to do the same thing. One thing I’m certain of: in the face of corporate interest in our continued ignorant sedation, this is no mean task. So long as ignorance is bliss, the fight for education will always be painful.