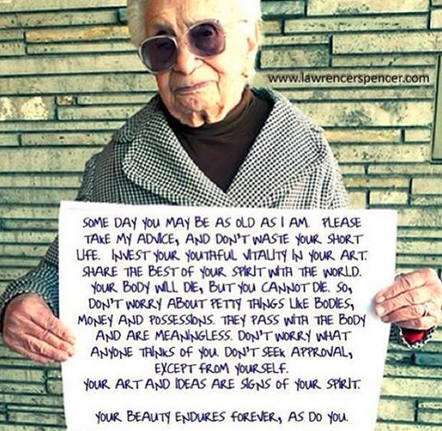 The above picture was going around Facebook the other day, posted I think as a kind of spiritual pick-me-up, an encouragement to live life to the full and get out there and create wonderful things. The problem is, it’s absolute bullsh*t of a rather pernicious and ancient sort.

Your body will die, but you cannot die… your art and ideas are signs of your spirit.

To get technical for a moment, this is Platonic dualism and it arises from one of the great existential problems, that of our own consciousness. In a recent piece on the progress (or lack thereof) that neuroscience and philosophy are making in understanding our sense of being, Oliver Burkeman wrote:

[Consciousness] doesn’t seem to be physical. It can’t be observed, except from within, by the conscious person. It can’t even really be described. The mind, Descartes concluded, must be made of some special, immaterial stuff that didn’t abide by the laws of nature; it had been bequeathed to us by God.

In other words, we have this lump of bloody organic flesh, this failing and limited and mortal body, but sat atop it is a divine spark, an undying immortal spirit, the genie(us) that is… ‘us.’

In revolt at the horrible thought that we – like the animals and plants around us – might simply keel over and decay and be taken back into the ground, we concluded that our extraordinary spirits would live on. Surely it is clear that we were worth more than mere dogs or roses! We are higher beings! Deprived of the chance to persist as physical matter, we grasped upon ways to make our existence continue to matter. Hence religion. Hence art. Hence words like those above.

It is an ancient problem, one that we see in the Eden myth in Genesis:

Then the serpent said to the woman, “You will not surely die. For God knows that in the day you eat of it your eyes will be opened, and you will be like God, knowing good and evil.”

You will not surely die… You will be like God.

And yet the funerals keep on coming…

In the face of abundant evidence that we clearly do die and rot and decay, we surmised that a) we must have offended God in our hubris and have been subject to a great ‘fall,’ but b) there remains in us a spirit that aches to lift back up and rejoin the divine.

In other words, we will die, but we will rise again.

This is the orthodox message of Christianity – but the picture shared above is nothing more than a generalised form of the same. This time the endurance of your spirit lies not in the divine work of Christ, but in your creativity, in your ability to create. The messages are identical, except for the figure who does the work of resurrection. In the religious narrative, it is the creator God who lifts us from death into immortality; in the Facebook version, it is us who lifts ourselves through our own acts of creation.

The work I am doing at the moment in the forthcoming book Getting High offers a critique of both of these positions. While atheists and theists spat over the mechanism for resurrection and enduring meaning, I want to get past that and suggest that it is the very desire for lift that is the problem.

The extraordinary fact our consciousness turns out to be both our greatest blessing, and worst curse. Refusing to accept that something so wonderful could be so transient, it constantly generates narratives that allow for its persistence. The idea that we won’t die is an idea that won’t itself die. And yet the curse of this is an equally persistent anxiety about our future resurrection.

For the religious, this means having to work hard at salvation, or – if one has come to terms with grace – anxiety about the salvation of others.

For the (nominally) un-religious, it means anxiety about the banality of labour, and the posting of photos like the one above that drive us to drop our humdrum jobs and start creating. Help!, we say. I must write something significant! I must leave a monumental legacy of great meaning! I must be an artist.

Against this, what I’m proposing is that we work through two connected horrors. The first is the fact of our own mortality. A tough ask, but one that we can come to terms with. Beyond that though is a far greater horror: once we have learned to accept our own death, we then need to accept that there is no greater meaning beyond it or behind it.

Our lives, our wonderful consciousness, are a brief flowering of something terribly beautiful. But it is a beauty that has no greater meaning than itself. It does not point to a higher beauty above, nor to a perfect coherence in the universe that we don’t yet understand.

Coming to terms with this is a profound theological, philosophical and psychotherapeutic task. And it is one that will never be finished, because – as I’ve been learning through reading proofs of Tad Delay’s excellent book God is Unconscious  – our consciousness keeps on generating gods. The problem of God we unearth in this radical reading of Christianity is that ‘he’ keeps on being resurrected.

We keep on pushing beyond Good Friday to Easter Sunday, but the point of Christianity is the crucifixion of all gods, the continual putting to death of these narratives that desire immortality – but lead us into terrible anxiety.

What I try to do in Getting High is show how these narratives have expressed themselves not just through mainstream religion but through drugs, space travel and the grand hopes of AI. They are all thus ‘religious’ technologies. Yet – and I’m really glad they’ve picked up on this – those who’ve read the manuscript have all commented on how positive a book this is. This is not a depressing story of ‘we all going to die’! Far from it. What I aim to offer is a reworking of this idea of resurrection, a new understanding of the after-life, one that has accepted our mortality, our transience, our lack of grand meaning. One that frees us to be creative, but releases us from the dual anxiety of having to aim at pleasing or being The Creator.

Looking forward to people being able to read it, more news of which soon I hope.