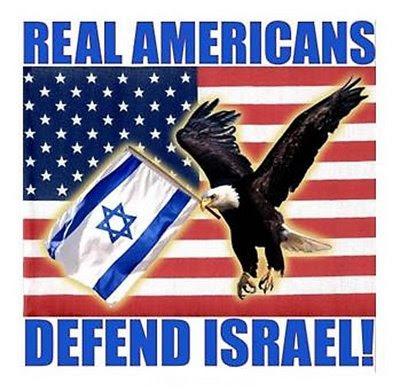 ...but they should defend justice.

The political shake-up in the Middle East is going to have serious repercussions across the West too. A democratic system does not prevent those with extremist views coming to power by the will of the people, and there are many in the US and Israel who are concerned that releasing Mubarak’s stranglehold in Egypt will result in a more aggressive stance towards Israel and the rise of extremist elements in its politcs.

However, in the case of the more aggressive stance towards Israel, it’s clear that this is an equal and opposite reaction to the almost unquestionably pro-Zionist stance of the US. The Arab countries may appear extreme in their political aggression towards Israel, but this is exactly matched by the extreme political aggression the US has traditionally shown in support of Israel.

Much of this support has come via the Christian right working in coalition with the Zionist lobby, and what concerns me is that many who may be moving towards a more ’emerging’ view of faith are not really thinking through the implications of that politically. In other words, if you are beginning to call into question your inherited ecclesioloy, you are also going to have to call into question your inherited political theology.

What I love about what Brian McLaren is doing is that he has refused to shy away from this. He’s been to the region, seen with his own eyes, and responded in his writing and speaking. Shane Claiborne has done the same, as has Jonny Baker.

Sadly, many have not followed. They want a theology of ecclesiastic liberation, without a politics of a just peace, and I’m afraid that the two simply don’t match up.

Although he is a self-confessed ‘conservative republican’, a conversation I had on Facebook with someone recently outlined one of the key problems. A plea to pray for peace in Jerusalem – a worthy prayer, of course – was followed by a quotation from Genesis:

“I wil bless those who bless you, I will curse those who treat you with contempt, and all the peoples on earth will be blessed through you.”

This was followed by the comment, ‘this is not an interpretation; this is just a quotation from Scripture.’

The problem is, by framing this verse in the context of prayer for peace in Jerusalem – alongside a video link to the Israeli national anthem – it has been conscripted to speak on behalf of modern Israel. Which then begs the point: does it mean that Palestinians should be cursed? If so, then the many many Palestinian Christians I know living in Bethlehem or Beit Sahour are being told they are cursed by fellow Christians in the West.

The verse is God addressing Abraham – and again here is a problem. Are the Old Testament passages that refer to Israel to be read as refering to the modern nation state of Israel too? If they are, then Israel is effectively a Jewish state. And this is inherently racist as defined by the UN: its laws are biased towards people of one particular faith.

The problem here is that this is precisely what is going on in Israel: the law works in favour of those who are Jewish, and against those who are still Israeli citizens, but of Arab descent.

The theological positions we hold have political implications, and if these are unbalanced and unjust then we can only expect an equal and opposite position to be held by those on the other side. ‘Praying for peace in Jerusalem’ has to mean justice and peace for all on all sides, and retaining a strongly pro-Israel stance – at the expense of justice for Palestinians – is actually fuelling extremism.

Please, don’t inherit poor theo-political positions. See for yourself – go to the region if you can and meet people from all sides. I’m pretty sure that’s what a guy from Bethlehem would have done a while back.