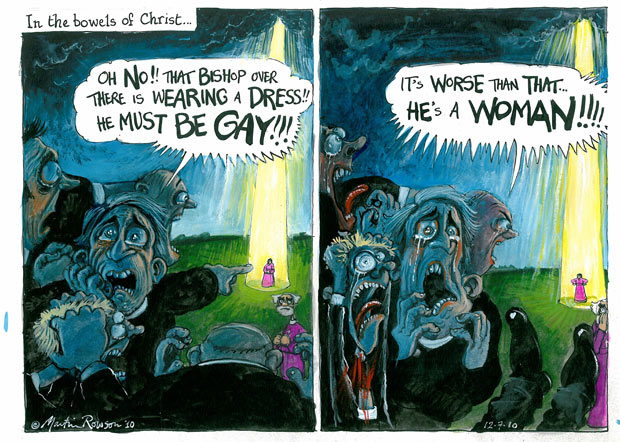 I’ve been following the discussions that have been going on in the Church of England recently over the issue of whether women should be able to be bishops. It appears that the answer is going to be ‘no’. Or, at least, ‘not yet.’

What I’ve not quite been able to tease out is precisely why. I’ve read through the C of E’s 2004 paper on the issue – available here as a PDF – and, though it sets out three lines of argument: Scripture, tradition and reason (see page 232), it concludes that each of these can be used either to support or refute the issue.

Today I listened to a Philosophy Bites podcast on John Rawls’ theory of justice. In it, Jonathan Wolff outlines a thought experiment of Rawls’. Imagine two people are discussing what the fairest taxation system was. One might imagine that a richer person would argue for a lower tax burden, and a poorer person for a higher one. Rawls suggests that the fairest taxation system would come out of an argument between these people if they had no idea of their own wealth position. What type of taxation system would you like if you did not know if you were rich or poor? Extending this principle more widely, as Rawls puts it: people disagree about justice because they are biased by their own interests. The discussion in the podcast then brings up another example: what would your attitudes to racial discrimination be if you had no idea what race you were? It is the blind who perhaps have the best view on race.

Listening to this made think about the women bishops issue. Imagine being able to meet a person, talk to them, see them lead and minister, pray and preach – all without knowing what gender they were. Given that women can do all of these things at least to an equal degree as male bishops, and that we could theoretically follow a competent person around who could do the job of bishop in a godly way without knowing their gender, the question then becomes: what is the fundamental thing about being a woman that means they cannot take on the role? The CofE has already concluded that the arguments from Scripture, tradition and reason can be used both ways, so I feel that it is really for those who would want to deny women the right to be appointed to explain what it is about them that bars them.

Is it simply chromosomes? Being a woman, or a man, is part of our ontology. As a man I can act like a woman – I can change my behaviours to be more womanly, but I cannot become one. Or can I? Issues of gender are not quite as straightforward as we might think – as the case of the South African runner Caster Semenya, who has undergone a gender test to try to work out if she really is female. But even if we leave these gender spectrum issues aside, I want to know what it is in a woman’s woman-ness that bars her from being a bishop. It’s simply not good enough to say ‘the bibles tells us.’ Why? Well put a hat on and we’ll go stone some people and discuss it.

What I want to hear from those who think women cannot take on the role is a precise reason why. And I’ve yet to hear one that deals with the ontological question. For me, that boils it down to plain sexism.