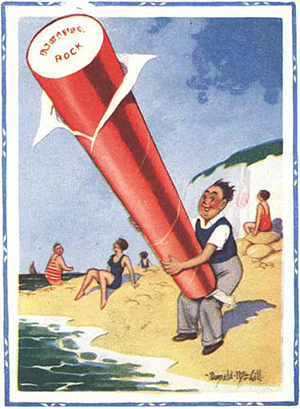 Had a fine morning yesterday with Barry Taylor at the Tate Britain. We went round the very wonderful Rude Britannia exhibition, which is a lot deeper and richer than saucy postcards, though there are plenty like this one above to tickle your fancy. Different rooms of exhibition have been co-curated by the likes of Harry Hill, Steve Bell and the cartoonists from Viz, and offer a huge range of perspectives on satire, political commentary and the plain absurd. It’s very funny, and also offers great relief (no jokes please) as one is left with the feeling, looking at political cartoons from 1780, that nothing has changed: dirt and heresy and tricksterism is still a hugely important mode of cultural expression, one that, by saying the unsayable, attempts to change the unchangeable. And gradually, it does.

In a way, that’s how the conversation fell with Barry afterwards over a coffee. What’s going on in the UK church that excites you? Barry asked. It is likely a critique of my own failings, but I struggled to find anything I was really excited about. It seems that we are in a bit of a doldrums time, between one phase of emerging expressions or whatever, and another, and with many appearing to move back towards the institutions who can offer support and security, rather than risk remaining on the edge. I wonder whether others feel the same? Can anything change? And who are the tricksters out there offering dirty bridgeheads into those new territories?

It was great talking to Barry though, who, as a Brit living in LA has a unique perspective. I really hope we can hook up on some stuff in the future. He’s off to Italy, lucky guy. Perhaps he’ll get some better football out there than the rubbish we’ve had to put up with over here!