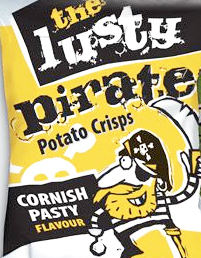 Nic has wanted to argue in the comments that piracy is simply a symptom of the hegemony of capitalism, and that as a dependent it therefore does nothing to critique it. I’d argue more positively: piracy does spring inevitably from capitalism, but as a valid and robust critique of it. Pirates are born from the detritus of the merchant and ruling classes – and come back to bite them.

The pattern we see emerging is this: when a society or religion gets ‘stuck’ and begins to over-control access to ‘vital’ resources, pirates will always emerge to work some thievery and unblock the flow. This unblocking, initially condemned as heresy by the establishment, is later embraced as orthodoxy.

Mission’s freeing of slaves is one example. It was only later that the West began to see that slavery was wrong, but pirates had opened up the channel of this heresy, and thus it began to infect orthodox thought, and eventually changed it. But other examples follow the exact same pattern: the heresy of Napster – music for free – has been embraced as the orthodoxy of Spotify. They are virtually the same product. Music was ‘blocked’ by lazy record companies and artists’ multi-album deals, pumping out boring compilations. Now the whole industry has been given a huge kick up the backside, and many many more artists are free to let their music out into the flow.

In the 60’s, pirate radio stations began to appear off the coast of the UK playing new-fangled ‘pop’ music. The government passed legislation to try to ban these pirates, but it was always going to be in vain: the heresy of this new music was eventually embraced as orthodoxy with the creation of BBC Radio 1 – with shows hosted by the very pirate DJs who had been criminalised.

So, as we look back and see the vilified pirates, strung up on gillets by the Thames, condemned for their heresy and sedition in the shadow of St Paul’s cathedral… do we not see something in the spirit of the crowds who gathered, who saw in these heretics the promise of a life more free and true? Do we not look back and see another man, condemned as a heretic and strung up by the authorities, and wonder if this short but merry pirate life that he led had something more to say to us than the dour message of obedience to authority that the stiff-shirted clerics of the stone-piled cathedrals preached?

I believe we should, and it’s to this pirate faith that we’ll turn in the next post.