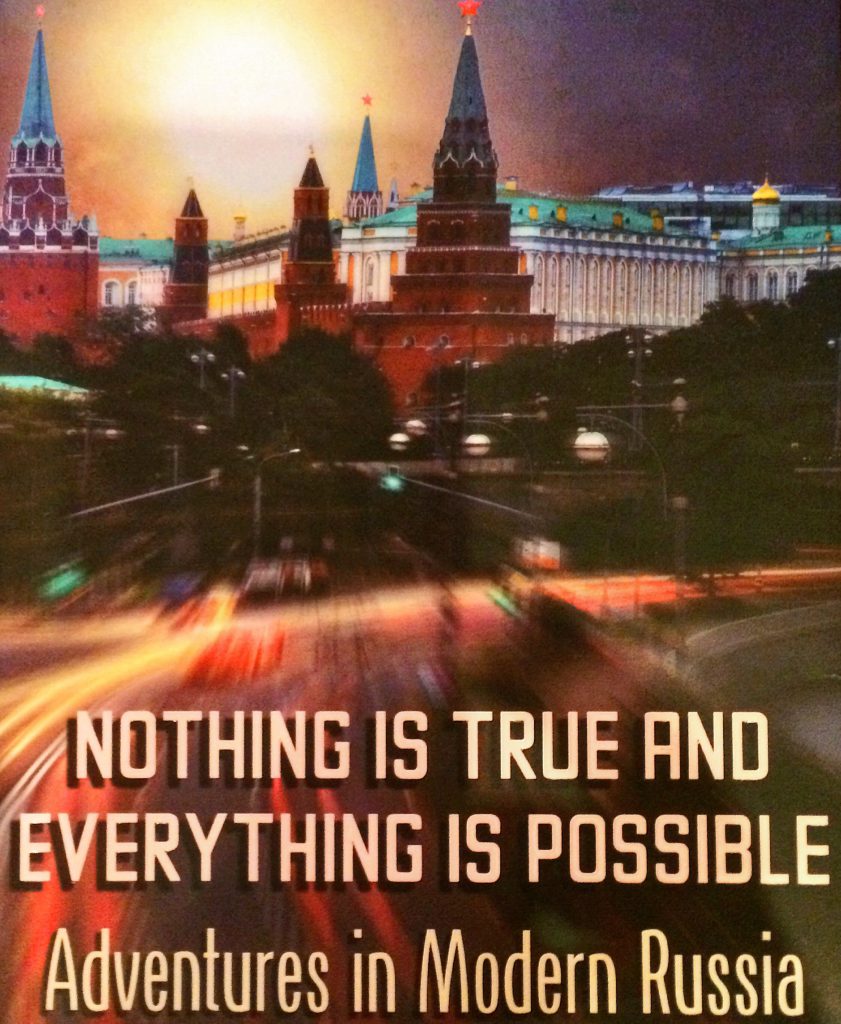 Over the past couple of weeks I’ve been re-reading Peter Pomerantsev’s book Nothing is True and Everything is Possible, each page pushing me towards the same, slightly counterintuitive conclusion: if you want to understand Trump’s America, you need to look to Putin’s Russia.

I first read the book when a colleague – a history teacher I’d travelled to Russia with in 2014 – passed me a copy 18 months ago. I marked it down as fascinating, a really interesting and expanding read, but not something that had any particular bearing on life in the West. Sure, London house prices were irritatingly inflated by Russian money pouring into the city, and – having travelled to Moscow and St Petersburg – it was interesting to get some background to the national situation… but I didn’t think it mattered so much. Russia was over there. The curtain may have rusted, but it hung heavy still.

I have completely changed my mind. On second reading, I’d go as far as to say that this is possibly one of the most insightful and weirdly prophetic books around. Far from being an exotic, ‘alien’ place, I think Pomerantsev shows us a Russia that is a troubling archetype for the next turbulent wave of politics, one that is tied into strange bondage with mythic nationalism and a post-trust culture.

The lynchpin of much of this appears to be Putin’s ‘political technologist,’ Vladislav Surkov. A one-time theatre director, he is the architect of Putin’s reign. Pomerantsev recounts him describing himself in a lecture:

My portfolio at the Kremlin and in government has included ideology, media, political parties, religion, modernisation, innovation, foreign relations and… modern art.

He is the ultimate shape-shifter, transforming from liberal moderniser to hard-nosed nationalist, a man who ‘claps once, and a new political party appears. He claps again and creates Nashi, the Russian equivalent of the Hitler Youth.’ As Adam Curtis (surely informed by Pomerantsev’s book) has explored in his documentary Hypernormalisation, Surkov’s strategy is simple: to create contradiction at every step, to deliberately kick dust in the eyes of the electorate, so that no one has any clue what is really going on:

It is realpolitik become reality show politics. The aim: ‘no one was sure what was real, or fake, in modern Russia.’ Sound familiar?

One of the things that you quickly become aware of as you begin an even cursory look at Russian history is just how much this country – the largest on earth – has been through in the past 120 years. The violence and upheaval and sheer bloody-minded grit of these people is quite extraordinary. With the collapse of the Soviet Union, the Russian people were again sent tumbling, the floor giving way beneath them, wondering where they would next land and who the hell would be in charge. They had nothing when the Tsar ruled them. They had nothing when the Communists took everything into state ownership, and they once again have nothing as a small number of oligarchs have asset-stripped the vast wealth of the nation and syphoned it into Western bank accounts, freshly laundered. Two things become clear from this: firstly that ‘strong men’ like Putin and Stalin are worshipped because what the Russians want above all else is some semblance of security. There is a steely determination about making Russia great again – and yes, this is the language that is used. But secondly, their repeated collapse and reconfiguration has left Russians with a very special kind of psyche, one that is fluently polyglot and shape-shifting as Surkov himself, as Pomerantsev explains as he interviews a group of TV producers: 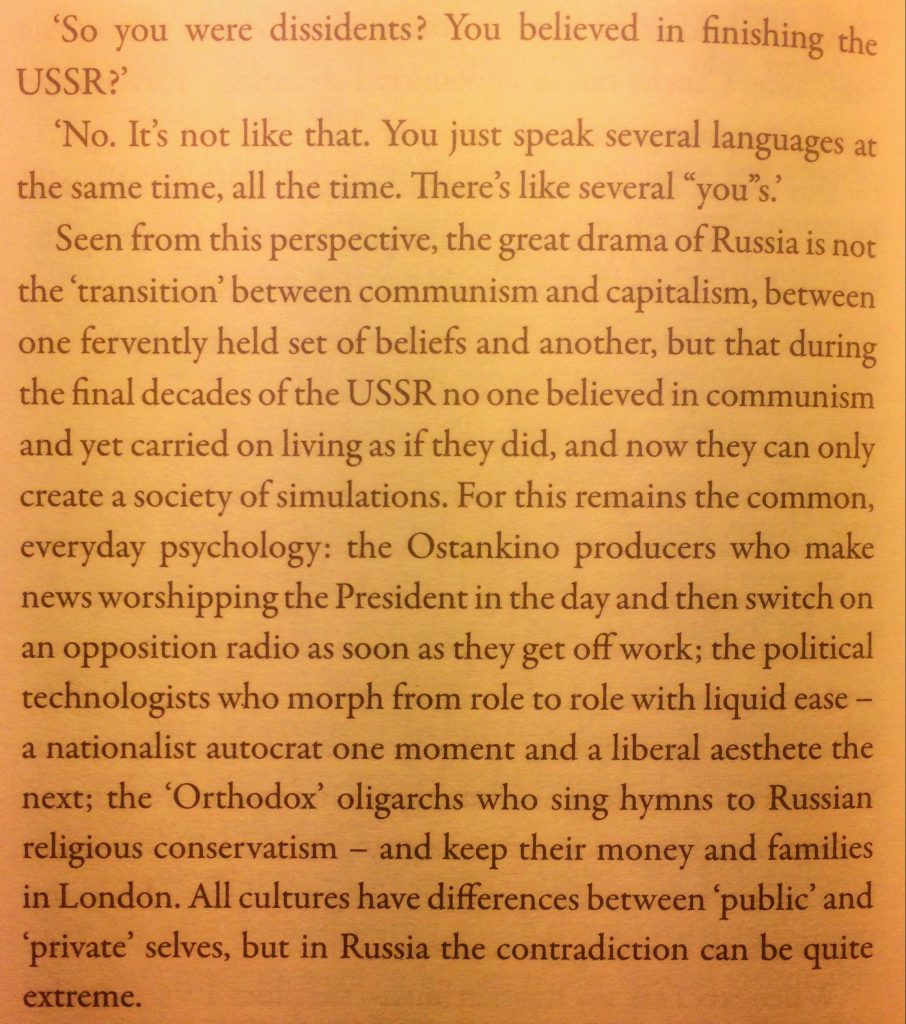 This ability to constantly morph, to not care about what is ‘real’ or solid or truthful, is shown as a hallmark of the new Russia.

‘This new consciousness could only appear here,’ one popular Russian guru says, ‘in this country which is the graveyard of all ideologies.’ Or, as Pomerantsev puts it:

‘this idea unites all the post-Soviet sects: all the suffering, all the shocks Russia has gone through made it the place where the new man, the new future could be born.’

If Russia is to be great again (and it really is not so great right now), then the myth of greatness needs to be rekindled and fuelled. And we all know that myths don’t feed on what is real, nor need truth to be true. So, after all it has been through, Russia thus becomes a place where, as the title of the book goes, nothing is true, but everything is possible.

One of the great things about being connected to great people is that they offer distillations of a wider context than one person could achieve on a full teaching timetable. So, having read one book, I’m thankful to Tad Delay for posting a quote from another – Hannah Arendt’s The Origins of Totalitarianism, published in 1951 – that would appear to be a source for Pomerantsev’s thinking:

“In an ever-changing, incomprehensible world the masses had reached the point where they would, at the same time, believe everything and nothing, think that everything was possible and that nothing was true…The totalitarian mass leaders based their propaganda on the correct psychological assumption that, under such conditions, one could make people believe the most fantastic statements one day, and trust that if the next day they were given irrefutable proof of their falsehood, they would take refuge in cynicism; instead of deserting the leaders who had lied to them, they would protest that they had known all along that the statement was a lie and would admire the leaders for their superior tactical cleverness.”

And so to America.

The communications between Putin’s Kremlin and Trump’s White House that are slowly emerging will – perhaps – show that there has been some conscious political connection between these two power-bases. Perhaps Trump is Putin’s puppet. Perhaps the Kremlin deliberately applied leverage to get Trump elected (and also funded Brexit too). Perhaps they do hold compromising information about him. Perhaps – as this fascinating ‘tweet storm’ by Eric Garland proposes (and discussed in depth here) – Russia simply played a speculative hand, and events played massively in their favour.

But, behind all of this context, what I think is more interesting is the hypothesis that Trump is fascinated by Putin because he sees in him a guy who has figured out how to do power politics in a new era. This era is defined by huge wealth concentrated in the hands of very few, a large disenfranchised and impoverished section of the population who see globalisation and liberal values as the problem, and a powerful media machine that has tentacles into every shirt pocket and living room in the nation, a machine that thrives on confusion and contradiction, on viral spectacle as a way of bedazzling the masses, of kicking sand into our faces.

If we look at Bernie Sanders and Trump, they both essentially diagnosed the same problems within American society. The reason we have Trump in power is because he correctly interpreted the zeitgeist. The lesson from Russia – a country that has already been through it – is that people no longer want a socialist revolution. They aren’t interested in the left – even if the projections make it clear that voting that way would be materially better for them. Or, more accurately, the powerful forces of corporatism have told them that they should not be interested in the left, that it won’t serve them well.

In a sense, this is what we see in Brexit and Trump: a disenfranchised, impoverished, poorly informed section of society who are manipulated by a ‘strong man’ who promises to return them to greatness. This is precisely the function Putin plays in Russia, and he sustains it with a dizzying performance of myth-making that makes even Farage look normal.

The question that the left faces is how to counter this. Certainly, it won’t be an easy task, and nor is it one for a counter myth-maker like Corbyn and his Momentum gang. As the profoundly well-qualified Hillary Clinton found out, it’s going to take a quite extraordinary effort, overcoming forces that are well-hidden, and very very connected.