I’m no firebrand when it comes to trades union activity (though I am a lead rep in the education union I am a part of) but when a Tory government starts rattling sabres and threatening even more draconian legislation to outlaw strikes, it has me worried.

Last night I finally got round to watching The Divide – a cinematic rendering of The Spirit Level: Why More Equal Societies Almost Always Do Better, Wilkinson and Pickett’s seminal work on the wide-ranging effects of economic inequality on life outcomes.

If you’ve not read it you should drop everything and do do now. I can think of no other book, soundly based in aggregated research data, that offers a more direct call for a singularly effective policy agenda: if we reduce income inequality then life gets better for everyone. Lower crime, less anxiety, reduced depression and obesity…

Through the stories of real workers struggling to ‘just about manage,’ what The Divide so powerfully shows is that the Reagan/Thatcher agenda of liberal free markets served only to make a tiny elite exceptionally wealthy, while those at the bottom gained nothing. Cashiers at hugely profitable Wal-Mart having to rely on government food stamps, care workers in the UK getting payday loans… and this abyss-mally widening gulf of gross inequality has served to increase anxiety, social tension, depression and crime.

But at the root of this — which Adam Curtis affirms in Hypernormalisation — is a huge shift in the balance of power away from employees to employers. Über. Deliveroo. Zero hours contracts. The gig economy. The constant erosion of workers’ rights. Combine this with the society-wide atomisation and the loss of face to face community, and the result is a supine, frightened workforce so terrified of falling into debt and homelessness that when the bosses say jump they simply ask how high.

I’m not in favour of a return to unions holding governments to ransom. But I am all for workers doing more to act together, uniting for the benefit of the weakest in an organisation, and holding bosses to account to prevent them creaming grotesque profits while government welfare systems mop up the mess.

The word ‘strike’ cones from pirates: brutally oppressed men who, having finally had enough of their labour being exploited by princes and merchants, would strike the sails of their vessels and render them useless.

This is the necessary mutiny we need to affirm when the balance of power goes wrong, the powerful action needed to force the other side of the story to be highlighted.

What fascinates me is not why there so many little pockets of industrial action happening at the moment, but why there aren’t more. Why haven’t workers torn down the warehouses of Sports Direct or JD Sports? Why didn’t we get beyond Occupy Wall Street and actually…  occupy Wall Street?

It’s to this question that I wrote Mutiny!, my book examining the deep roots of pirate culture and our fascination with these figures of radical liberty. It was released a couple of years ago now, but feels more relevant than ever. There’s a new edition just out too. 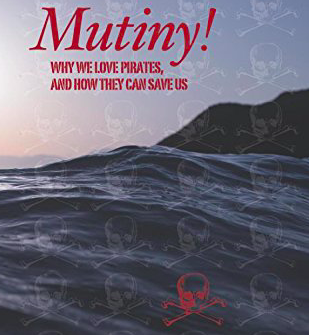 In short, what pirates did was rise up against a violent elite who had enslaved them. A mutiny is an act of unity, a declaration that enough is enough, and that a different regime is needed. By commandeering the ship they were taking control of the means of production, and thus establishing a system where equality was back on the agenda. And if you still think that pirates were simply violent thieves, then you’re still listening to the narrative of the oppressor… which means you really need to read this 😉