‘We must respect the democratic will of the people.’ So said Chancellor George Osborne this morning, after just shy of 52% of the 72% of the British population voted to leave the EU. A vote was held, the results were counted, and the fundamental principle of democracy requires that we respect the decision.

But what if what we have witnessed wasn’t actually the highest form of democracy, but a low facsimile of it? As our country tears itself apart, and is ravaged by financial markets, should we blindly demand that the will of a slight majority of those who voted (around 37% of eligible voters voted Leave) must be followed? If we #VoteHeaven but get Hell, would it not be wise to do something?

I want to argue that it would. Importantly, I also want to argue not that we run the referendum again (let’s do so until we get the right result!) but that, when democracy threatens to deliver us into an abyss, we should protect ourselves from descent by deepening and widening our democratic processes.

Voting in the Dark

When Michael Gove stated that people were not interested in experts, what he said was chilling and cynical, but too often true. He wanted to exploit this disinterest in fact and expertise because the vast majority of expert argument came down on the side of remaining in the EU.

This is how the FT put it: 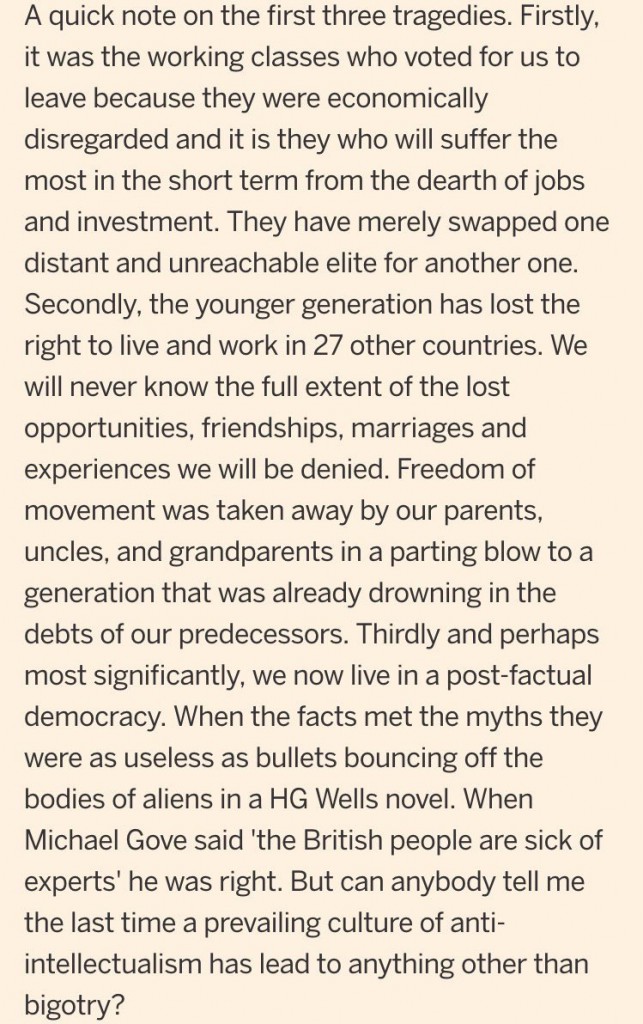 A post-factual democracy is not, in my mind, a functioning democracy. This doesn’t mean that we should hand over the running of our country to experts (a form of technocracy, if you will) but it does mean that democracy only functions well when democratic agents take responsibility for their vote, and ensure that they are well-informed before they make it.

However, being well-informed is, in our culture, very difficult. When there is a vast and sophisticated machine working to achieve disinformation, and when that machine is the de facto light that has raised and nurtured people over a long period of time, the ability for democratic agents to make informed decisions is seriously curtailed.((This can be true for a wealthy pensioner in Hampshire brought up on a Euro-skeptic diet of Daily Mail conservatism or for a working class young man in Wales)) People end up voting in the dark, and the dark is a cynical ploy by those who want their votes.((Much of the debate on how this Brexit vote happened has bordered on condescension for those who voted for it as foolish and ignorant. I don’t buy this. You cannot call a plant stupid for not flowering when it is given no light; nor, when extraordinarily powerful forces of media and socio-economic confinement persistently press a narrative into a population, you cannot call them ignorant.

To throw the debate into another realm: in the future, will we ever grant advanced AI robots the vote? The question of whether we should or not turns on whether we believe that these beings that we might create could ever truly be free agents, or would they simply be acting out a simulation of liberty based on the data that they are fed and the algorithms that we have taught them to use to process it? My argument would be that any argument against giving advanced automata the vote would be hard not to apply in parallel to ourselves too, because so much of our supposed free agency is programmed by the media we are fed and we lack the critical space to challenge it.))

A vote is always a punt on the future. If you opt for this choice, it is likely that this will happen. Take in the data, process it, output a decision. But here is the fundamental thing about this Brexit vote: those in the Leave campaign engaged in ‘dishonesty on an industrial scale’ as they set out their reasoning for choosing a future outside of the EU. 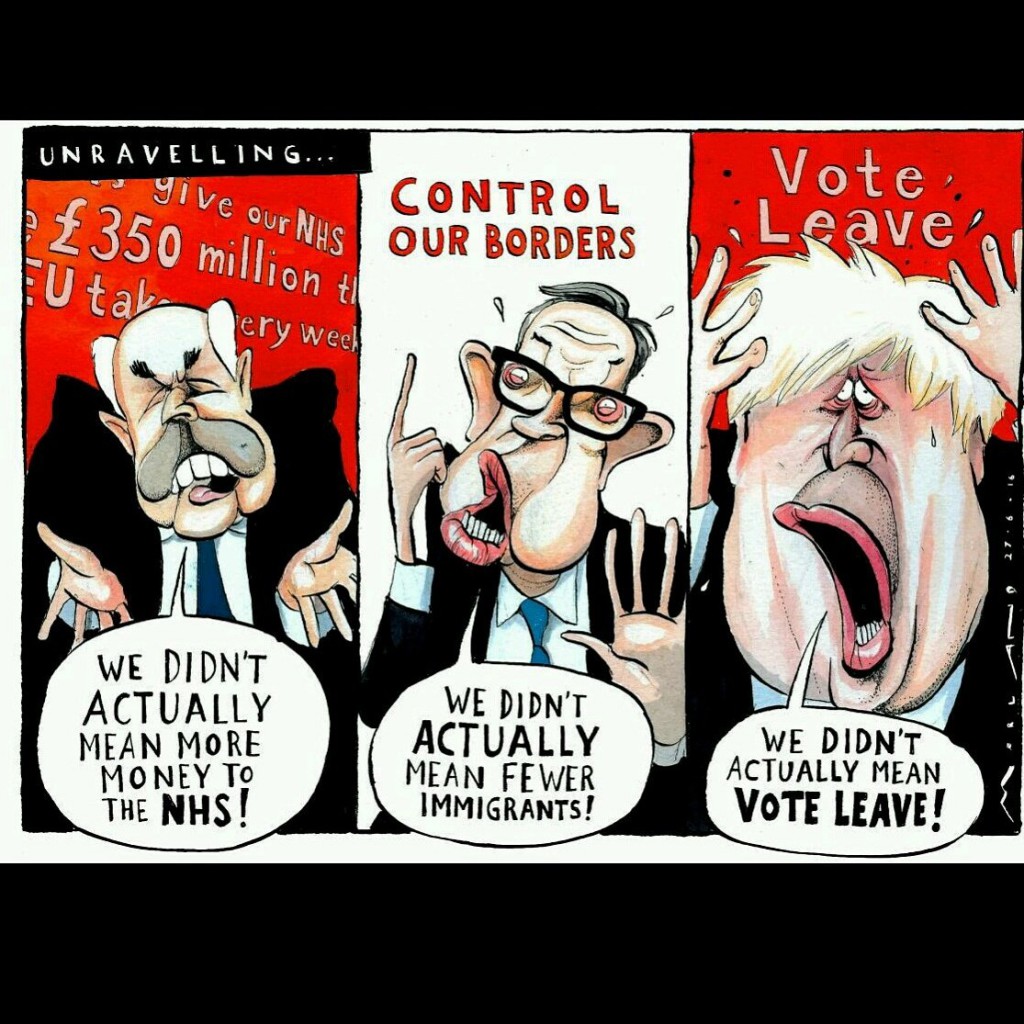 Now, once the dawn is rising on the actual consequences of that decision – now that it turns out that Leave don’t have a plan in place at all, now that we’re seeing a complete unraveling of the United Kingdom, no further investment in the NHS, no change to the number of migrants, massive economic shock – now that Heaven has turned out to be Hell, there is evidence that many people are questioning how they voted.

This is absolutely natural, because this – what we are actually experiencing now – is not what they democratically voted for, because what they voted for was an illusion that tapped into very deep and very human anxieties about community and liberty.

In other words, when George Osborne says that we must persevere with Brexit because it is the democratic will of the people, this might not actually be true.

This is why we now need to think again. But what we need now is not less democracy because democracy didn’t work, but more.

In Plato’s famous analogy, he saw humankind as imprisoned in a cave, with reality no more than shadows flickering on a wall. Our task was to use critical thinking to free ourselves and step into the light of the True Forms of things.

Pushing this further, what we have to ask is what the source is of the artificial light that is projecting this illusion of reality. Moreover, what if he was wrong, and that there is no such place of final enlightenment, no ‘true form’ at all?

If this is right – and in a post-theistic, post-‘perfect’ culture, I think we should work within that – then everything has some illusory element. Everyone is projecting, and in the confusing interplay of shadows, we need some way of working out the best way forwards.

Among all imperfect means of progress, democracy is – as Winston Churchill put it – the least worst. But democracies have always functioned at a more sophisticated level than raw ‘everyone vote for each law.’ In Britain we have a parliamentary democracy, where the people (note – only those above 18, those below 18 not being considered enlightened enough agents to participate) get to vote to send the most equipped representative they can find to sit in the House of Commons. This is then held in check by House of Lords. Imperfect, but it works, and only in extreme cases does the Commons get to ignore the Lords. The same kind of system exists around the world, with Upper and Lower chambers.

The point is this: democracy works best when it is tested. It hardens into the best, wisest will of the people when it is considered, argued, voted on, passed around, debated, voted on and passed back. In the situation we find ourselves in it seems stupidity of the highest level to ignore this tried and tested system and insist on the raw will of the people, even when those people have been exposed to dishonesty on an industrial scale.

In his Five Regimes, Plato discusses how he sees tyranny evolving out of democracy, because ‘democracy is taken over by the longing for freedom.‘ The people begin to experience democracy as somehow limiting to their individual freedom because the greater good of the will of the people often means that their choice does not ‘win.’ A charismatic tyrant then rises who convinces them that he will hand them back their individual liberty. He is a great shining light, promising liberation from the cave. He is the True Form.

“Last of all comes … the tyrant. … In the early days of his power, he is full of smiles, and he salutes every one whom he meets … making promises in public and also in private, liberating debtors, and distributing land to the people and his followers, and wanting to be so kind and good to every one. … This is the root from which a tyrant springs.”((http://www.wnd.com/2015/10/how-tyrants-arise-platos-eerily-accurate-words/#bp33dcdYFMfyyZLK.99))

Boris Johnson, a man full of smiles (before Friday morning, anyway) is just such a tyrant, and Donald Trump is another. They come offering liberty, making huge promises in public and private, wanting to ‘take our country back,’ or ‘make America great again.’ But Plato warns that we should beware of them.

The best way to stymie the threat of tyranny is to have an evolved democracy. And that seems to me the most mature and reasoned thing that we can do in this situation. Yes, a referendum has delivered us to the brink, but we have the democratic apparatus to pull back from the abyss.

Given that the result was so close, given the levels of financial and constitutional chaos, given the dishonest claims that have now been exposed, we should ask our democratically elected representatives to debate and test whether or not it would be in the best interests of the country to remain in the EU.

The referendum result is not legally binding. The vote has given us a glimpse into the future, without committing us to step into it. Now that #VoteHeaven has turned out to look very like Hell, we should do more democracy.

To blindly push on in the cold light of what we now know would not be the politically principled thing to do. Quite the opposite. We need parliament to fulfill their democratic mandate and responsibility to govern in the best interests of the country and take this to a debate, and give MPs – representatives from each part of the country that we have elected – a free vote.