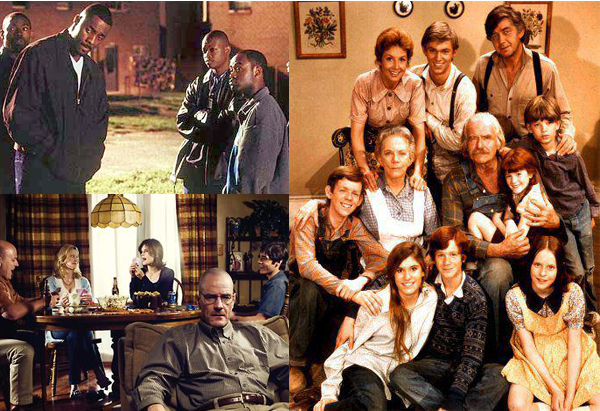 As Breaking Bad draws to a finale (last episode airing on Sunday / Monday) I wanted to post some quick thoughts – clear warning, this may therefore contain spoilers.

It’s become a bit of a truism to say that it’s the best thing on TV, but it really has been an immensely enjoyable series. I watched The Wire in its entirety too, and have been struck by similarities and differences between the two shows.

Both shows are founded on family (though The Wire moves away somewhat from this as it moves beyond Season 3). All of Walt’s actions in Breaking Bad are about making money to support his family, and the core of the opening scenes of The Wire is the bonds around the Barksdale family, and the ‘crews’ on the corners who are essentially family-like units.

Both shows are also about labour and toil. Walt begins by calculating the money he needs to make in order to keep his family financially secure. Throughout the seasons he has become more obsessed with protecting the rewards for his labour, or getting them back. They are his. The remuneration for his toil. Similarly, especially in the scenes where Avon Barksdale deals with his sister, the need to keep working, to retain ‘real estate’ in order to keep the money rolling in to keep supporting the family, is very clear.

In this way, both shows are in an odd way deeply conservative. They are the American (read Western) Dream: apply yourself, work hard and you will be rewarded. Do it for your family, for your core unit. Would it be too much of a stretch to say that Walt is straight out of The Waltons?

The Waltons was set in the aftermath of the Great Depression, and concerns a family trying to eek out a living as the labour at a saw mill. It’s tough out there, but they make sure that they truly hang together, and do all that they can to lift themselves above the poverty line.

The environment within which The Wire and Breaking Bad set their characters to work share similarities with The Waltons. Baltimore is a city with deep poverty and deep systemic problems. Albuquerque – post global economic crisis – is also shown to have pockets of poverty, but what makes Breaking Bad more shocking is that Walt is an everyday middle class guy, with a decent house and good standard of living. Why does he do this? The ‘inciting incident’ is the onset of his cancer, which presents itself as a disease which could kick his family off the tiny ledge of financial achievement. The costs of decent healthcare for Walt are going to be so crippling that his family will be plunged into terrible debt.

In other words, like The Waltons, both The Wire and Breaking Bad have protagonists who live in terrible fear of what might happen to their families. They have a deep anxiety about the precarious social and financial position that their families are in, and will do anything to shore up their position.

This is where The Waltons differs. The Waltons lived within certain moral bounds, but Breaking Bad and The Wire clearly have an alternate code because when we say they will do anything to bring money in to bolster their families, we soon find out that this means anything.

It is uncomfortable to admit it, but we find it easier to ‘expect’ that the Barksdales – poor, black, from the projects – will murder and torture and use violence – than for Walter White – well off, white, from the suburbs – t0 do the same. But both are shocking. What is emphasised in Breaking Bad is the terrible logic of each of Walt’s decisions. Zooming in, each decision he takes is entirely logical. In order to save my family, I need to get out of this situation, which means this person must die / be left to die etc.. It is only in the wide angle, zoomed out sense that we see the absolute horror of the consequences of this logic.

We see this in The Wire too. Stringer Bell is a hard-working man, attending business school to try to make his enterprise work more efficiently, on well-founded, logical economic principles of supply and demand. The classroom scenes are calm and tranquil, more like a scene from a saccharine high school drama. But the implications of Bell’s business decisions are horrific in terms of the impact on the lives of those caught up in cycles of violence and drug abuse.

All three dramas can be said to be set against the backdrop of global capitalism. I’ve written in my books about the 5-stage ‘fantasy cycle’ of Anticipation / Dream / Frustration / Nightmare / Death-Wish which Christopher Booker explores well in The Neophiliacs: Revolution in English Life in the Fifties and Sixties. In terms of this cycle, The Waltons could be seen to be on the cusp of the anticipation / dream stages: things are hard, but through honest toil it can only get better, and good things are coming.

The Wire and Breaking Bad are both set in the Nightmare / Death-Wish stages of this cycle. Whereas nothing could go wrong in the Dream Stage and energy levels were high, here nothing can go right, no matter how much energy is thrown at the project. Everything is spiralling into a black hole. There is no escape. These are dramas at the endgame of consumer capitalism: cut-throat, anxious, precarious, driven by the code of a hard financial logic which cares nothing for people – even though it still claims to be driven by family values.

They are tragedies, and are all the more gripping for it. Why? Because we enjoy vicariously viewing the downfall of others? Perhaps. But I’m more persuaded to think that they, like great novels, speak into our own fears and anxieties. Because aren’t we all Walter White and Avon Barksdale?

The killings and beatings are further off, sure, far enough for us not to be able to hear their screams. But when we continue to sustain our families on purchases of goods produced by cheap labour in dangerous factories, when we continue to strain the ecologies of far off places by our continued addiction to fossil fuels, when we participate in financial products or tax arrangements in order to improve the financial security of our families, even if those products ‘win’ by taking short-term-gain positions on vulnerable currencies or our far-flung tax havens contribute nothing to the investment in fabric for needy communities – when we do all of these things are we not in some small way doing exactly what Walt and Avon and Stringer did? Are we not committing daily tiny atrocities in order to secure our own futures?

Their anxieties are ours. Their logic is ours. We love to turn out the lights, one by one, calling out to our families ‘night John-boy’ and dream that we are The Waltons, in all their bucolic, dignified simplicity. But when the last light flicker off and the darkness comes, perhaps our deepest fears about our family’s places in this precarious economic system really haunt us, and it is then we look in dark mirrors and see Heisenberg, with all his uncertainty, peering back.