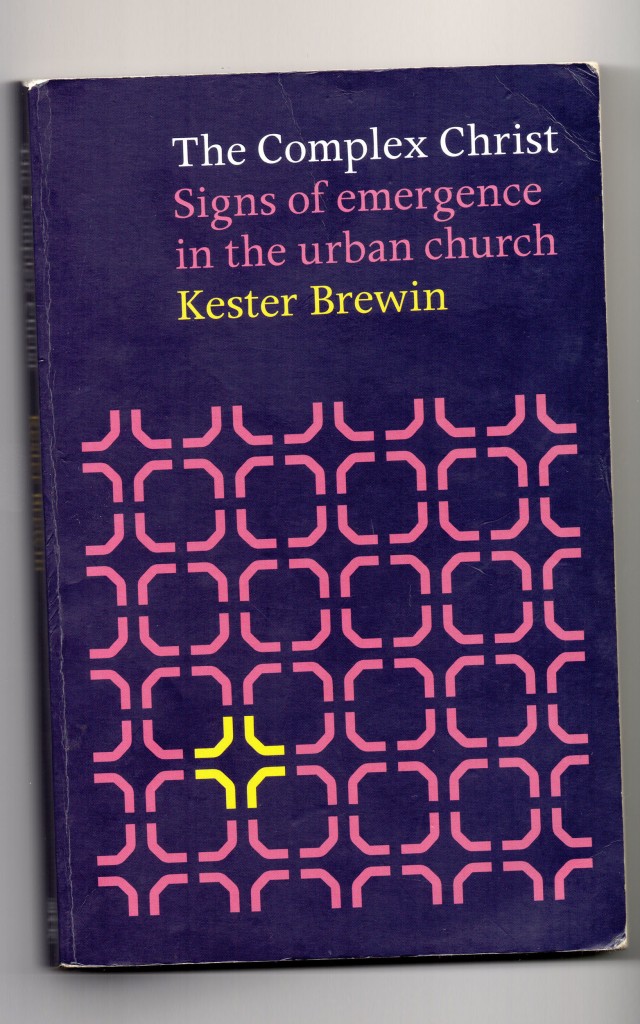 Happy to announce that there is now a Kindle version of my first book The Complex Christ – released in the US as Signs of Emergence. An iBookstore / ePub format version will be available soon too.

It’s nearly 10 years since the book was released, and I’ve moved a long way since that time, something I reflect on in the new preface, which I’ve reproduced below.

The book did get a very positive reception, and was described at the time by some good people as ‘a stonking read’ ‘an important and unique book… a momentous achievement’ and ‘one of the 10 most important books for the emerging church.’ You can reserve judgement for yourself!

Structurally, the book examines the gospel from the perspective of the science of emergence and complexity theory, and draws on studies of the evolution of cities, gift theory and the important place of dirt in cultural renewal. Scattered through the text are poems by me, RS Thomas, Rumi and WS Merwin.

I’ve tried to price it very reasonably. As with the other recent books, I plan to put a free version in the public domain in good time too.

It has been almost 10 years since The Complex Christ was released in July 2004 in the UK, and later as Signs of Emergence in the US.

10 years is a huge time technologically. When I wrote the book and arranged for publication I had no idea that an ‘e-edition’ would be in demand, and nor, it seems, did my publishers, SPCK. So, having asked for some time whether or not they were going to release a digital version, I eventually persuaded them to allow me to take back the rights to the e-edition and produce one myself. That you’re reading this means that through this new medium the text is reaching a wider audience – so thank you, and I hope you enjoy it.

10 years, for me at least, has also been a huge amount of time theologically. It has been fascinating for me to read my own words nearly a decade after I wrote them. I suppose an analogy with art is instructive: should the more mature artist try to suppress the re-release of their younger work, feeling that it no longer represents their current vision? Probably not, as long as the earlier work continues to shed interesting light on what has come after, and as long as the viewer understands that what they are seeing comes from a way back down the road.

Given both of these, a couple of comments by way of introduction. Firstly, this is a book I remain very proud of. I think it was ground-breaking at the time, and think it still has the power to break new ground for people now. The project to critique power structures and encourage self-determination and self-organisation is one that I’m still passionate about. The need to see that markets are limited and that the gift economy is a better place for many areas of life to flourish is still timely, as is the call for less sterile places to be given space, and for dirt to be seen as invigorating. Regardless of place or time, what we denominate as ‘dirty’ still tells us a great deal about who is ‘in’ and who is ‘out.’ The divine is still found in the shit.

Secondly, however, although these vectors are still valid, they have taken me far beyond the bounds that this text was set within. Where I speak here about church growth and renewing our view of God, the current location of these tentative first moves away from a fairly traditional evangelicalism is now outside of what would be taken for orthodox belief. The ‘punk’ work I talk about in Chapter 4 needed to go further. That more radical act of clearance by fire I first handed over to pirates in Other, and then developed properly in Mutiny – Why We Love Pirates And How They Can Save Us. I hope you’ll be inspired to take that same journey with these other works.

What you are about to read begins with the words ‘this is a book about change.’ And so it was. I’ve often remarked that writing is about striving to discover rather than reveal, and the writing of each book I have produced has ended up challenging and changing me. My hope that you’ll be open to challenge and change too for, as you’ll soon read, “to stop changing is to die.”

Here’s, then, to change, and thus to life and all its beautiful, dirty and generous complexities.