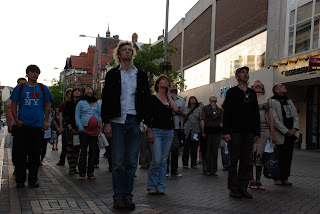 A good friend Jonny spent a week or so in silence in the hills of Wales recently, and has been blogging really beautifully about the experience. The term I don’t like that’s often used for these periods is ‘retreat’ – it’s too military for me, and carries with it a sense of moving backwards. Though (likely for want of a better word) Jonny uses it too, what I like about what Jonny has done is that he seems to have very much seen it as about moving forwards, rather than escaping backwards.

I’ve been thinking over his experiences, and thinking too about the issue of the ‘examined life.’ I posted some thoughts on this last summer, asking if the examined life was actually worth living as the move into examination seems to inevitably lead to rough terrain. Socrates famously said that ‘to philosophise is to learn how to die,’ and there is a definite sense that to begin to live an ‘examined life’ brings one face to face with death: death of the self, death of selfishness, death of ideas and concepts that we’d unconsciously held on to. This process will almost certainly bring pain – and that’s part of the project that Pete Rollins has been uncovering: the emancipatory move from certainty and unexamined living will not be a move into an easier life. But once one has seen that there is a road to travel, and that your chains are your own to unlock, who can stay put?

Holding this in mind, one of David Eagleman’s short stories from Sum (which I cannot recommend highly enough) has kept coming back to me:

In the afterlife, you are treated to a generous opportunity: you can choose whatever you would like to be in the next life. Would you like to be a member of the opposite sex? Born into royalty? A philosopher with bottomless profundity? A soldier facing triumphant battles?

But perhaps you’ve just returned here from a hard life. Perhaps you were tortured by the enormity of the decisions and responsibilities that surrounded you, and now there’s only one thing you yearn for: simplicity. That’s permissible. So for the next round, you choose to be a horse. You covet the bliss of that simple life: afternoons of grazing in grassy fields, the handsome angles of your skeleton and the prominence of your muscles, the peace of the slow-flicking tail or the steam rifling through your nostrils as you lope across snow-blanketed plains.

You announce your decision. Incantations are muttered, a wand is waved, and your body begins to metamorphose into a horse. Your muscles start to bulge; a mat of strong hair erupts to cover you like a comfortable blanket in winter. The thickening and lengthening of your neck immediately feels normal as it comes about. Your carotid arteries grow in diameter, your fingers blend hoofward, your knees stiffen, your hips strengthen, and meanwhile, as your skull lengthens into its new shape, your brain races in its changes: your cortex retreats as your cerebellum grows, the homunculus melts man to horse, neurons redirect, synapses unplug and replug on their way to equestrian patterns, and your dream of understanding what it is like to be a horse gallops toward you from the distance. Your concern about human affairs begins to slip away, your cynicism about human behavior melts, and even your human way of thinking begins to drift away from you.

This moment of lucidity does not last long. But it serves as the punishment for your sins, a Promethean entrails-pecking moment, crouching half-horse halfman, with the knowledge that you cannot appreciate the destination without knowing the starting point; you cannot revel in the simplicity unless you remember the alternatives. And that’s not the worst of your revelation. You realize that the next time you return here, with your thick horse brain, you won’t have the capacity to ask to become a human again. You won’t understand what a human is. Your choice to slide down the intelligence ladder is irreversible. And just before you lose your final human faculties, you painfully ponder what magnificent extraterrestrial creature, enthralled with the idea of finding a simpler life, chose in the last round to become a human.

The vector of the examined life is singular: you cannot return to ignorance once you have begun. And I think this helps us with the myth of ‘simplicity’ and the sometimes utopian ideals that people can project onto times of ‘retreat’ – which Jonny has skilfully avoided.

Life is clear: there can be no retreat. You cannot return to some simpler, equine life. To do so with any integrity would mean lobotomising your experiences up to that point, unlearning everything you had taken on board and erasing memories of where you had been before. It would be a spiritual and intellectual regression, from which there could be no great joy.

The challenge of Descent of Species is the same challenge Jonny hints at in his posts after his period of silence: not how to capture some elysian life, some bucolic existence away from humanity, but how to engage in the discipline of simplicity and silence in the midst of the inevitable forward vector of life.

In other words, our task in pursuing truth is never to regress backwards towards a false ignorance, covering eyes and ears and pretending that the complexities and depths of life do not exist. Our task is to face those complexities with a life ordered by periods of reflection and silence, and to have the courage and discipline to walk calmly into those challenges, unflustered and without lashing out in violence.