Ode to a bookshelf…

See now the empty bookshelf
that stands still with a thousand volumes
now unseen, the bookends racheted
so tightly, the pages compressed so absolutely
into the digital thinness of silicon.
The words remain, though they are now in bits,
and can be read, just as they once were…
yet not stumbled upon or casually flicked,
not dragged down by the young and curious…
‘Kindle’ they say, but no young fires are lit
from the morgue-white minimalist shelves
of the digital future. 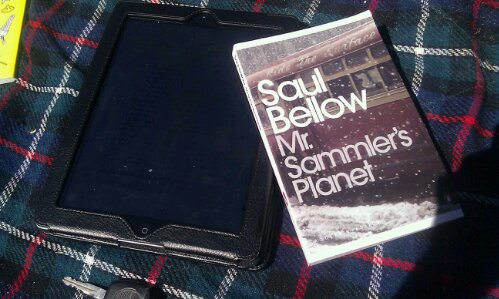 I’ve been reading a bit of stuff on various digital devices while away… I’m not going to be overly Luddite, nor uncritically romantic about a physical-book past: the convenience of having the complete works of Shakespeare and searchable copies of my own stuff on my phone is too much for that. Plus, it’s undoubtably been really good for me in terms of being able to distribute Mutiny! widely.

However, I think we are beginning to see some of the unintended consequences of going for e-books. I recently read some research (sorry, can’t link here at the moment – writing this on a beach in France with crap 3g signal) that found that children who grow up in households with lots of books – regardless of social background – do far better at school. What I’ve come to see about an e-book is that it is an i-book: it is removed from the ‘commons’ of the visible bookshelf and read-from-the-other-side-of-train-carriage to an anonymous, flat piece of text that is far more difficult to share.

Here’s the irony of the ‘Kindle’ – I, and I suppose my story is not uncommon, caught the fire of reading by just grabbing things from my parents’ shelves. I was curious about these objects because they were there. The removal of their physical presence into a digital medium may not affect the owner/reader of the text, but could it close their content down, reducing the possible impact that their materiality might have?

I suspect it might. The chancing upon a cover that looks interesting, the plucking of a volume from the shelf just to have a gander… I worry that in a digital world, the power of the bookshelf as more than a storage space, but a display cabinet too, is neutered.

The world is still being made, of course, and perhaps I may be wrong…. But for me, the power of the book as object, and the gravitational pull that that mass exerts, remains vital. Yes, I’m happy for e-editions of my work to be out there…but I hope that readers will remain thoughtful about the ways that texts are presented, and how they might remain in the public eye, rather than hidden behind log-ons and menus.