Rather than remain online, I thought I’d flyer-up some of the ideas I’ve been working on and hand them out at the Occupy demo in London today, camped at St Paul’s. You can download the PDF here:

Or just read the text…

In May 1724, in a small bookshop just a stone’s throw from here under the imposing shadow of St Paul’s Cathedral, a plain, leather-bound volume went on sale among the fine bibles and illuminated religious texts of the day.

What it lacked in aesthetics it made up with its arresting title: A General History of the Robberies and Murders of the most notorious Pyrates. Captain Charles Johnson’s book was an instant hit, lapped up by the same crowds who flocked to the banks of the Thames to see the bodies of freshly executed pirates hanging in chains.

Why, nearly 300 years later, do we still flock to all things pirate? Why are we happy for our children to dress up in eye patches and torn trousers to go to pirate parties when we would probably be less happy to send them off to one with an ‘aggravated robbery’ theme?

The brutally violent lives of sea-faring 18th Century thieves have long been domesticated into polite children’s books with titles like Pirates Don’t Change Nappies and Shiver Me Letters – a Pirate ABC, yet while children point cardboard swords into the backs friends, demanding they walk to their death from chipboard planks laid on the floor, we know that Somali fishermen are holding men at gun-point, demanding millions of dollars in ransom payments, while across in Brussels, having won a huge section of the youth vote in Sweden, the leader of The Pirate Party is enjoying the trappings of being a member of the European parliament. In countless homes hooky DVDs that Hollywood technologists will have used sophisticated encryption and watermarking techniques to prevent copying of are being watched illegally, following frightening warnings about copyright and media theft, despite the story-line itself being buxomly full of swash-buckling thievery. Perhaps the striped t-shirt and eye-patch is all wrong. Children should be sent to parties with a plastic bag of pirated movies, or arrived in inflatable ribs, toting AK47’s.

Pirates are everywhere. Why? In his 1724 book, Captain Charles Johnson called them ‘hostis humanis generis’ – the enemies of all mankind – so why do pirates adorn t-shirts, skateboards… and even baby bottles? 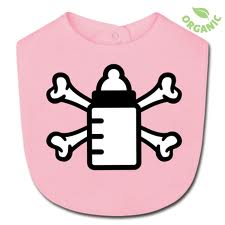 Why do we think children should be dressed in images of death and violence?

The reason is this: deep down, we know that pirates say something to us about freedom from oppression, about standing up to systemic violence, and about taking back free access to that which has been enclosed and privatised by the wealthy.

Captain Johnson’s description of pirates – as romantic and sometimes daring people, who were nonetheless needlessly violent, greedy and out to pillage all they could from the good Empires of England and Spain – is the impression most of us are left with now.

The historical truth is somewhat different. Sailors aboard Royal Naval ships and merchant vessels were some of the sorriest men alive. Here were poor men who found themselves, in the words of surgeon of the time, ‘caught in a machine from which there was no escape, bar desertion, incapacitation, or death.’ Historian Marcus Rediker writes that

‘sailors suffered cramped, claustrophobic quarters, “food” that was often as rotten as it was meagre… they experienced as a matter of course devastating disease, disabling accidents, shipwreck and premature death. They faced discipline from their officers that was brutal at best and often murderous.’

The merchant ships were the engine of the emerging global capitalism. They transported slaves from West Africa to the plantations, and sugar and other commodities back to England – where they were sold for huge profits, all of which went to the small number of merchants and shareholders. The sailors on these vessels were utterly excluded from this wealth. Though providing the skill and muscle to make the entire enterprise work, they were brutally treated and could expect to live only a couple of years. If injured, they were thrown overboard or abandoned on land to die.

The decision to ‘turn pirate’ was a decision to wrestle back some autonomy. These sailors knew they were going to die anyway – at least by turning pirate they could enjoy life for a while. ‘A merry life, but a short one,’ was their motto.

When they did turn pirate, life on a ship changed dramatically. Officers were democratically elected – and could be democratically removed too. Food was shared equally among men of all rank. When booty was collected the Captain only took two shares where the lowest took one – income differentials that would make modern CEOs faint. Pirate Captains like Bartholomew Roberts had his crew sign up to a code, which demanded no fights on board, no gambling, and lights out by 8pm. Moreover, anyone injured in the course of duties could expect generous compensation. Loss of a limb would be met with a payment of around £20,000 in today’s money. This was healthcare for the common man as had been never seen before.

Have you ever wondered at the clichéd view of the pirate with their wooden leg, hooked hand and eye patch? It may seem ridiculous, but does this not speak to us of a society that did not discriminate against the disabled? Pirate vessels were hugely inclusive, welcoming people of all races and faiths. Pirates would attack slave ships and invite slaves to join them – setting free those that didn’t.

Yes, there was violence and theft. But we have to understand that the levels of violence were dramatically less than that which they had come from, and they saw their theft from Royal ships as no more than what they deserved – for these merchants with their special charters were simply robbing other ships from other nations, and plundering colonies of their natural resources.

What pirates were doing was reacting against a capitalism that was exploiting them, but from which they were totally excluded. Rediker again:

‘Pirates abolished the wage relation central to the process of capitalist accumulation. So rather than work for wages using the tools and machine (the ship) owned by a capitalist merchant, pirates commanded the ship as their own property and shared equally in the risk of their common adventure.’

They were, in other words, standing in the long tradition of beating down those who enclosed ‘the commons.’ Back on land, in the years surrounding the ‘golden age’ of piracy, landowners were increasingly enclosing land that had been worked in common in order to work it for their own profits. This movement of enclosure was one of the most destructive acts in English history, as it removed people from the land that sustained them, and eventually led to them moving to cities to sell their labour in the factories of the industrial revolution.

This is why pirates still resonate with us now: pirates always emerge where economies or cultures have become ‘blocked.’ Where the commons has become enclosed for the good of the wealthy, pirates will rise up and agitate until things change.

We see this in the Atlantic piracy of the early 1700’s, which bubbled up as global shipping grew, making a few very wealthy, at a huge human cost.

We see this in the book piracy of the same time, where illicit publishers like ‘Henry Hill the Pirate’ disobey the crown and the guild of printers to produce cheap editions of books ‘for the benefit of the poor.’ Publishing was a blocked monopoly – the crown granting the right to print to a very small number of guilded printers, who in turn would never print anything critical of the crown.

And we see this in Somalia too – where men who have had their waters ransacked of fish by huge European trawlers, and then poisoned by surrounding states dumping toxic waste, see the billions of dollars of consumer goods being shipped past their barren shores in steel containers and think, ‘you owe me a little of that.’

We see it too closer to home in our music collections, where people grew tired of another £15 on an album of tired songs written by bands with fat contracts who frankly didn’t deserve it. Mick Jagger can rant all he likes about wanting 70 year copyright on his material, but he must know deep down that all The Stones did was sing the blues, and the blues have always been drawn from the deep musical commons that stretches way back before recording was even possible.

And now we see it here at St Paul’s too.

Why do find pirates everywhere? Because we know that in every part of life ‘the commons’ is being eroded and enclosed and privatised for the good of the few at the expense of the many.

Bar a few village ponds and the odd piece of heath, the earth we walk on has been enclosed, and the shared rights that we used to hold together are now held by private owners. We have survived the factories, yes. But our alienation from the land that we still depend on for our daily sustenance, and for the raw materials that are the building blocks of our houses, clothes and possessions has had a profound impact. Unaware of how food was made, we started to lack any care for what ended up on our plates. Unaware of what went into the clothes we wore, we allowed sweat-shops to prosper. Lifted from the earth by air-conditioned cars – privatized, enclosed transportation – we remained ignorant of a climate that is out of control. And as we plug in our headphones to listen to another X-Factor winner covering a song we can no longer quite place, we no longer hear the buskers on the underground, moved from their tunnels into specially branded zones.

We didn’t have time to think about these things, because rather than spending our time living, we had to spend more time earning a living: 9 – 5 the polite contractual joke as we do all we can to rake in what we can to pay the mortgage while we can and save what little we can for the rapidly retreating retirement that we can hardly believe will ever materialise.

We didn’t have time for leisure, because inflation had forced everything up save our salaries, all to bail out a tiny clique of money-men who bet wildly on how much debt they could sell us, and, having lost big-time, went crying to the government, threatening to pull the whole financial system down around them if their private losses couldn’t be shared publicly.

Yes, the only commons we have left are the publicly-owned debts we share having bailed out the privately owned banks.

We didn’t have time, we didn’t think, we weren’t aware. But fuck it, now we have time, now we are thinking, and now we are aware. And now were are here, at St Pauls, where pirate mania first began.

We are not much brutalised, nor often beaten or left unpaid, but our lives are no less reduced, narrowed and controlled by powerful forces far beyond our control. So now, more than ever, we need pirates to rise up again against the princes, the captains and merchants, raise the Jolly Roger, and restore to life some democracy, some fairness… and not a little merriment.