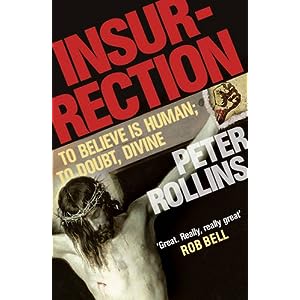 It’s been good getting to know Pete over the past few years. Our first books came out at pretty similar times, when we were both involved in similar projects in Ikon and Vaux, and since then I’ve come to count him as a good friend, and companion on a journey. The very nature of conversation means that threads are picked up and then left for a while, so it’s always good to get some of the thoughts and discussions I’ve had and overheard distilled into a crafted argument.

I suppose it was nearly two years ago when I headed over to New York to see Pete that I found him reading The Coming Insurrection – a revolutionary tract put out by The Invisible Committee. The back cover goes like this:

It is useless to wait – for a breakthrough, for the revolution, the nuclear apocalypse or a social movement. To go on waiting is madness. The catastrophe is not coming, it is here. We are already situated within the collapse of a civilisation. It is within this reality that we must choose sides.

It’s an influential and persuasive read, and I thought that Insurrection might draw far more directly from it, be a far more obviously inflammatory work. But while the content of Pete’s new book contains a very revolutionary kernel, he has, wisely I believe, chosen to take a more careful approach to presenting it in that his book is actually quite pastoral.

In the introduction (just to prove I at least got that far 😉 ) Pete writes:

In Insurrection, I endeavor to outline what this radical expression of a faith beyond religion might look like and how it has the power to give birth to a radically new form of Church… The following will not be an easy read; many will find it disturbing, for some of the things we hold precious will be attacked from the very outset. But it is written with a firm conviction that we must not be afraid to burn our sacred temples in order to discover what, if anything, remains.

And that is precisely what he does. Using a mixture of parables and stories, and weaving in thoughts from theologians and philosophers from a wide variety of backgrounds, Insurrection (not to be confused with the fantasy trilogy of the same name!) takes us on a journey that is, like all of the best journeys, engaging, sometimes frightening, beautiful and enriching.

But it is also a journey that refuses to return home. This is not a book that takes you to the boundaries of orthodoxy, stretches you and then returns you to your home comforts. This is a journey that – like the people behind The Coming Insurrection – opens the doors and takes you into a reality that demands some tough choices.

You could very easily read this book and be warmed by the cute, twisty stories and the interesting inversions… but that would be to be blind to the fierce message behind the text. For what Pete is asking you to do is nothing less than give up your Christianity. To give up the identities that you have built around it, the comforts you have brought into your pews and the affirmations you have wrought into your songs that mean that doubt is eliminated.

I know there will be those who say that the radical deconstruction that Pete is working in his writing leaves us with nothing positive – no way of serving the poor or reaching out to people. I think that’s a mis-reading. For me, Insurrection refuses to deliver simple messages that everything is ok because the poor and the needy matter too much. Christianity has gone so badly wrong structurally that it needs a radical overhaul if it is ever to serve people better in the long term, rather than serve its own needs in the short.

As Pete puts it in the conclusion (yep, I skipped to the last page)

[Denying the resurrection] means holding too tightly to what we have and identifying too closely with our idealized image. It means avoiding doubt, turning from our weakness, and refusing to face up to our finitude. In short, it means saying “no” to life.

But then there are times when we may affirm it: Times whenever we embrace life, face up to our pain, allow ourselves to mourn. Times when we meet our neighbour, look at ourselves without fear, take responsibility for our actions, listen to our fears, find joy in the simplest of things, and gain pleasure through embracing the broken world. In times like these, we say “yes” to life and, in doing so, we say “yes” to Christ. For it is only when we are the site where Resurrection takes place that we truly affirm it. To believe in the Crucifixion and Resurrection means nothing less than enacting them.

Insurrection, then, is both revolutionary and pastoral, because it is a call to integrity. To be – as Mother Theresa was – the change we need to see, even in the midst of enormous doubt. Here is the most clear link to The Coming Insurrection: for Pete, the central message of the a/theistic reading of Christianity is this: the resurrection is here, right now, so get on and live it.

I’d say this was essential reading… yet I’d also say that Pete is not finished, and it’s wise to read this book as part of an evolving theological move, the final act of which we are yet to see. Where he’s going with that will, I think, really force people to make some very tough choices. But with Insurrection we get the build up and background to exactly why those choices are going to need to be made.