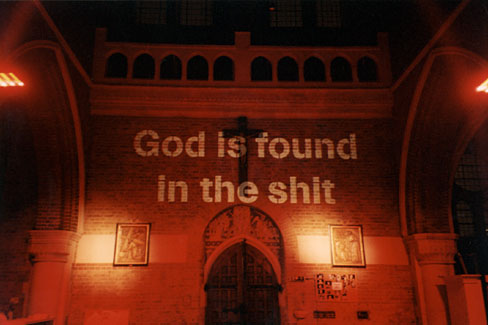 In the comments on the previous post Acetate Monkey asked ‘How did Vaux wind up?’ Resisting the temptation to explain all the ways that Vaux wound people up, I thought I’d post the section of the book that deals a little with that… with another encouragement to go buy it too!

All acts of worship are essentially acts of spiritual cartography. Given that we are destined to see through a glass darkly, our gatherings can only be a representation of a greater reality that we hope for. Our liturgies, our services, our songs, our multimedia offerings are no more than maps of a territory that we have faith we will one day walk in person. We scribble their contours and note down symbols, plotting our bearings and smoothing the folds. But the permanent danger of our institutions is to begin to confuse the map for reality, and worship our particular representation as physically ‘true’.

As any walker or driver will tell you, maps are dead documents as soon as they are printed. (They are bound to be: the most up-to-date and accurate map imaginable would have to represent itself as soon as it was created, which it obviously cannot do until the created thing is present to be represented.) This doesn’t render maps useless, but it does mean that, unless we are prepared to dispense with them and rework them on a regular basis, we are destined to view the world through the eyes of an interesting historic document, but one which bears little relation to the ground it purports to represent.

This was precisely the reason why, after ten years, we decided to put the public face of Vaux, the community I helped establish, to the sword. To many people on the outside it seemed like a strange decision: what we were doing was still ‘successful’. But for those of us on the inside, we knew that the maps that we were using were becoming increasingly dysfunctional and unrepresentative.

We had created a set of practices to fit the topology of our faith, but the ground had now changed. We could either soldier on – with the likely result that someone would get hurt or burn out – or decide that the maps had to go. ‘You can’t stop!’ was one message we had from people outside of Vaux who had never actually been; but that they took encouragement from the fact that something like what we did existed, despite never actually coming themselves, was simply not reason enough to continue. We made the decision, met twice more – once for a public ‘burning of the maps’, and once more for a wake where we celebrated the life that had been – and that was it. We left the building.

Of course, the fantastic hope of the Christian faith is that that is never it. Our story is based on the death and resurrection of Christ – yet we appear so afraid to ever allow things to die.

What I have always been hugely proud of in Vaux was the courage that people showed to go through with this death. I feel that it was a timely one, and that if we had continued with public expressions then the imperfections in our relationships would have grown to irreparable fissures. That never happened, and we are all still in very regular contact, looking for what the next TAZ might be.

I strongly believe that while the Church has an eternal dimension, our manifestations of church should retain a deliberately temporal one. While maintaining healthy networked relationships with fellow-believers, the public expressions of our faith will emerge and spring up in marvellous ways to temporarily liberate a space or time, but will then disappear before they can petrify and harden.

[Looking back for some pictures took me (inevitably) to Steve Collins’ excellent archive Small Fire. If you’ve not had a nose, it’s brilliant!]