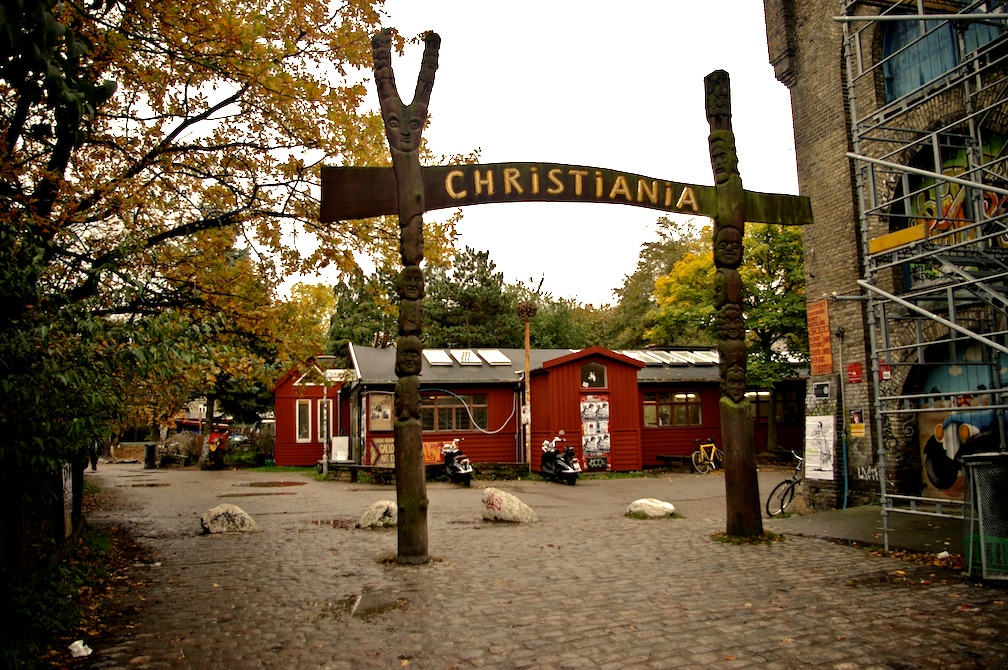 As promised yesterday, a post about a brilliant piece by Porter Fox in this month’s Believer about the micro-nation ‘Christiania.’

Christiania began when a group of Danes broke down fences to a long-abandoned military base in the centre of Copenhagen and started to use some of the space as a playground for their children. Covering some 85 acres, Free Town – as it is known to Christianians – soon turned into a government-tolerated ‘social experiment’, where property could not be owned, and no cars or guns were allowed. Being a) Danish and b) of hippy roots, drugs were for a long time freely available on ‘Pusher Street’; hard drugs were not tolerated though, and Christianian’s own methods for rehab proved hugely successful.

Christiania is a real-life experiment in utopia, and what makes it fascinating is that it is now around 40 years old. So how has it faired? Fox’s article is entitled ‘The Normalization of Free Town’ and it is this process of ‘norming’ that I think is fascinating – and also has some very interesting parallels for all utopian visions – heaven included.

What I want to argue over a couple of posts – and do in ‘Other‘ is that if utopian ideal is pushed towards permanence, it inherently leads to violence – and this is precisely what has happened as Christiania has come under pressure from a more right-wing government in Denmark.

As Fox notes in the introduction to his article:

It was with some surprise that Danes turned on their television sets on May 14, 2007, to see fires burning in their capital’s streets and gangs of police officers beating their countrymen with billy clubs. The worst of the fighting flared up along Prinsessegade Road in the Christianshavn neighborhood. A column of black transport vans filed into the street as residents hurled Molotov cocktails, rocks, and fireworks at police. Officers retaliated with batons and tear gas, and by that afternoon, the seventeenth-century streets had disappeared under a thick cloud of smoke.

The site was an ironic flashpoint for violence. Prinsessegade Road marks the northern border of a pacifist commune that has existed in Christianshavn since 1971. That year, a group of squatters overtook an abandoned army base east of Prinsessegade, barricaded the roads, outlawed cars and guns, and created a self-ruling micro-nation in the heart of Copenhagen. They called the eighty-five-acre district Christiania Free Town, drew up a constitution, printed their own currency, banished property ownership, legalized marijuana, and essentially seceded from Denmark. The traditionally liberal Danish government allowed the settlement at first, dubbing Christiania a “social experiment.” Then it spent the next three decades trying to reclaim the area. Thirty-nine years and a dozen eviction notices later, the nine hundred residents of Free Town represent one of the longest-lasting social experiments in modern history.

How did a pacifist community come to this? And, from our own tradition, how did Christianity come to represent the face of some of the worst violence in Western history? I’ll be trying to explore some of that in the next couple of posts, drawing in some more excerpts from ‘Other’ along the way.