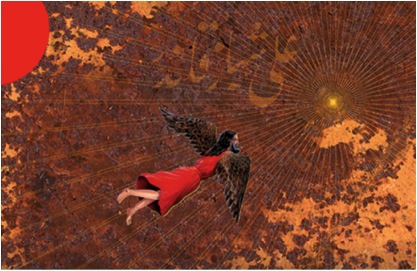 Good to see that Pete’s iPhone app is out now – and contains a collection of parables and other writing, including the competition-winning re-working of ‘Footprints‘ that I wrote last year. He’ll be adding to it over time, so well worth getting in early and picking up a copy now.

Stories are vital to all aspects of belief in all faiths. I can’t think of a faith where story is not absolutely central, and while some may mock from the sidelines and say that this is because all faith is fiction, I’d argue that this is precisely the point: faith concerns something that must be told obliquely. Rationalise a sunset and you’ve destroyed the beauty.

I’ve been reading William Dalrymple’s new book Nine Lives over the past week or so. Dalrymple is a wonderful writer, and a brilliant observer of history and conversation; Nine Lives is an attempt to do for Indian belief what he did with the remnants of Byzantine Christianity in From the Holy Mountain – examine the endgame of religion in a country developing so fast it is in danger of losing its identity. Dalrymple takes a very simple approach – telling the stories of nine Indians, ranging from a temple prostitute to a caster of bronze deities to an illiterate story-teller/dancer.

The stories of the gods within Hindu culture are myriad – easily a match for Greek mythology in scope and psychological significance. This one about Lal Shabaz Qalander struck me in particular:

One day Lal Shabaz Qalander was wandering in the desert with his friend Sheikh Baha ud-Din Zakariya. It was winter, and bitterly cold and as the evening came they decided to build a fire to keep warm while they camped. They gathered some wood and built a pyre, but then realised that they had no way to ignite it. So Baha ud-Din suggested that Lal Shabaz turn himself into a falcon, fly down and bring some fire from hell.

Off he flew, and hours passed. Eventually the bird-god soared back to Baha ud-Din, and fluttered to his side, empty-handed. Cold and bewildered Baha ud-Din asked him why he had not brought fire back with him. “There is no fire in hell,” he reported, changing back into his usual form. “Everyone who goes there from this world brings their own.”