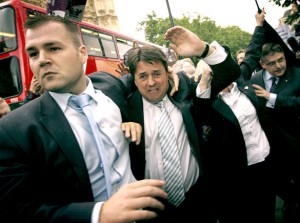 Despite Nick Griffin making an ass of himself on television last week, fascist and extremist parties never talk complete nonsense. There is always a dangerous fraction of truth within their rhetoric – a miniscule grain upon which they then build racist and mindless policies.

Unless serious politicians are willing to admit these small fractions of truth, parties like the BNP will always be able to flourish. It is pointless shouting them down and berating them for being totally false. The grain of truth that the mainstream parties need to admit is this: mass immigration has been tough on people, especially those at the bottom of society.

Managing change is one of politics’ main tasks, but I think that the political class have been too simplistic in saying ‘immigration and multiculturalism are good things’ and not working hard enough to a) show why this is the case and b) give people time and space to express their feelings about it. Shouting people down as racist for having reservations about huge cultural changes has only led people into the arms of the BNP.

The last 50 years have seen greater and faster changes in British society than perhaps at any other time in recent history. While the direction of this change is totally right, the speed of it can have a rupturing effect on those who do not well understand it, and perceive it as imposed on them from outside; they thus do not ‘own’ it.

So I’d like the mainline political parties to be more honest with us. Change is difficult. Multiculturalism is a high ideal towards which we should strive, but it needs managing more carefully, especially in relation to those whose communities are going to change most quickly. Cut the crap about ‘let’s have an honest debate’ and actually start having some honest debate. Debate that owns up to the small fractions of truth that the BNP feed off; debate that apologises for having taken the people of this country for granted.