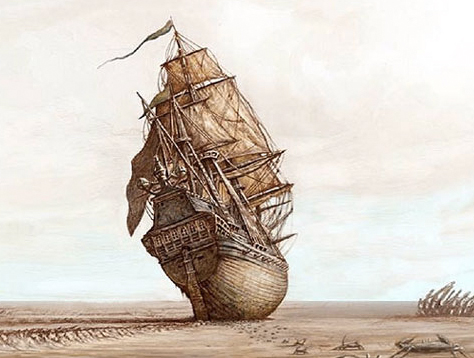 Pirates are so hated by corporations because they represent a critique of the capitalist establishment, an insurrection by those who have been marginalised by the supertanker of economic growth and greed. It is well known that pirates robbed ships and made off with booty. What is less well known is their attacking of slave ships, freeing those who were being transported to forced labour in the New World.

One mythic Captain Mission captured a Dutch slaver off the coast of Africa, and his speech to the crew of that boat was recorded (put on your best pirate accent):

‘The Trading for those of our Species cou’d never be agreeable to the Eyes of divine Justice and no Man has the Power of the Liberty of another; and while those who profess a more enlightened Knowledge of the Deity, sold men like Beasts; they prov’d that their Religion was no more than a Grimace!‘

What this highlights so well is the connection between the pirates’ rejection of the emerging capitalism in the empire-building west, and the rejection of the empirical Christianity that went with it. In this way, we can see the pirate critique of this powerful society as not simply social resistance, but also as heresy.

Lamborn Wilson, in Pirate Utopias: Moorish Corsairs and European Renegadoes sees heresy as a means of cultural transfer. The example he uses is of the co-evolution of Celtic Christianity and Druidry – once they had interfaced with one another there was transfer between them. Christianity was never quite the same, and neither was druidry:

“When a religion from one culture penetrates another culture, it frequently does so as “heresy”; only later do the Orthodox Authorities arrive to straighten everyone out…”

But the problem is that even when the orthodox authorities – or British navy – do arrive to sort everyone out, the damage has been done. Good, pure Christianity has been infected by druidry, and good upstanding colonies have been infected by the pirate spirit.

The key point for us here though is the vector of that heresy, because it is precisely Captain Mission’s heretical view of Christianity as a religion that ought to respect human rights universally that has become the orthodox view. And this is what we’ll explore in the next post: how pirates offer a heretical view of a ‘stuck’ orthodoxy that points the way towards a renewal of what orthodoxy should mean.