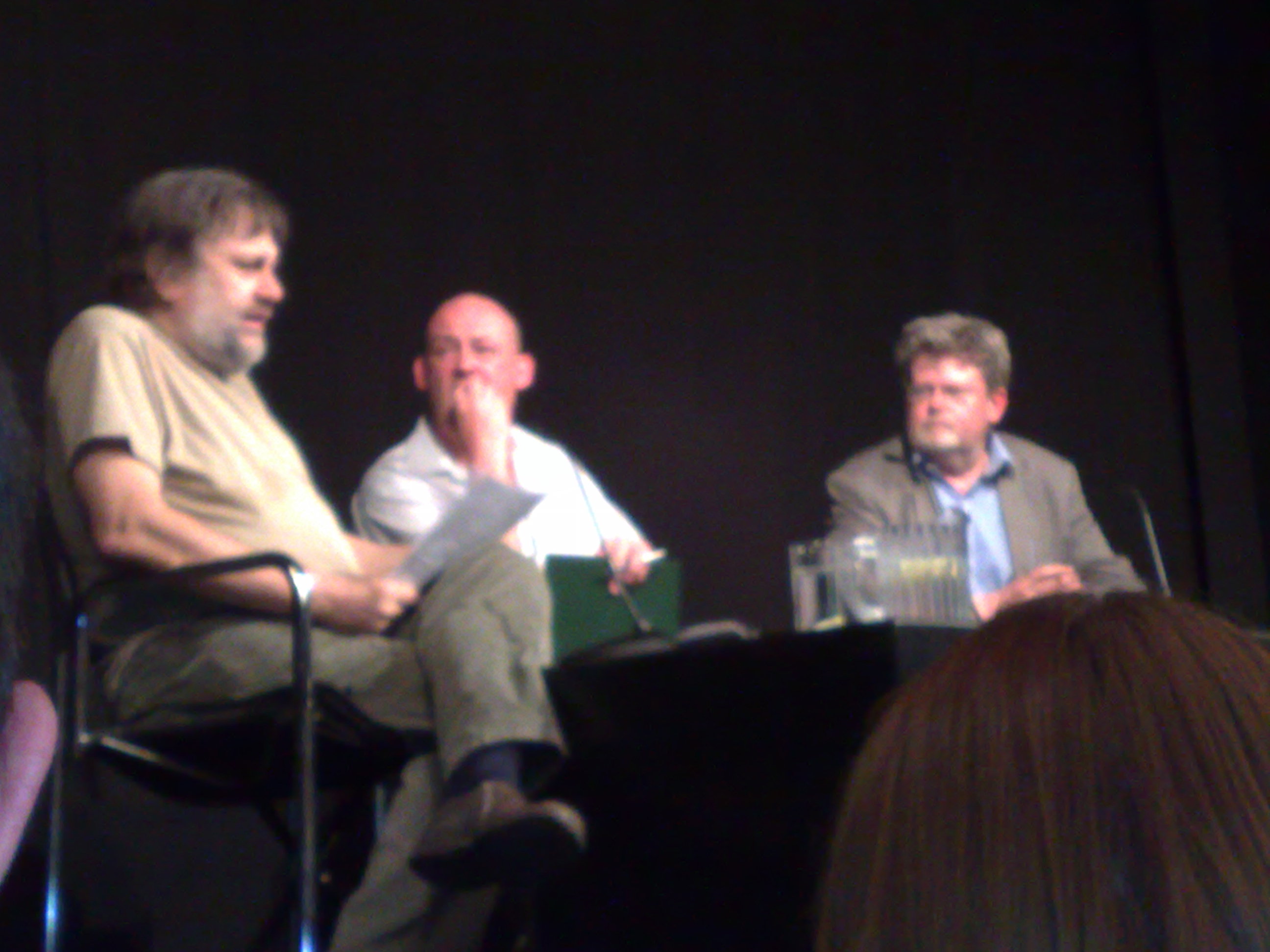 A very interesting, if complex, debate at the ICA last night between Slavoj Zizek – atheist, Marxist – and John Milbank – ‘radical orthodox’ theologian. Both are clearly fearsome intellects, though doubtless Zizek has the better jokes.

It would be an impossible task (actually, Thomas Lynch does a great job here!) to even attempt a reasonably comprehensive summary of the ground that was covered – Dawkins was swatted away like a fly, Jesus’ words about hating your father and mother were hotly debated, and the problems of the limits of materialism were raised with a lovely metaphor about coding of surfaces in computer games.

So, rather than do that, I want to mention one area that, in my perception, seems to be at the heart of what Zizek finds fascinating about Christianity.

Zizek sees Job as ‘the first modern critique of ideology.’ In his terrible suffering, his friends gather round him and attempt to defend various ideals. Job, on the other hand, refuses to do this and simply defends the meaninglessness of suffering. Although he didn’t touch on this last night, in The Monstrosity of Christ Zizek writes about how he sees the Job story not as one in which Job is being put to the test. Rather, it is about God being put to the test, and God failing dramatically. What he did touch on, which I don’t think he did in the book, was the passage at the end of Job where God raises his voice and asks ‘Where were you when…‘ – reeling off a whole list of amazing things in nature. Zizek’s interpretation of this is that God is saying, ‘you think you’ve got it tough? Look at all the crap I’ve got to deal with! This universe is impossible to keep going properly! I’m stressed out here!’

In the book he then goes on to imagine Job looking God in the eye and saying ‘I hope you’re watching, because one day you’ll have to go through this yourself. One day you’ll suffer, and know loss…’

Jumping forward to Jesus, what Zizek sees happening on the cross is a direct line from Job:

‘What dies on the cross is precisely a God who we can directly trust, and the very idea of benevolence. The basic message of Christianity is thus not that we trust in God, but that God comes to trust us.’

The radical kernel that is left at this death, which Zizek sees as the death of God – Father and Son, is the ‘Holy Ghost community.’ Our separation from God, our abandonment by God – in Job and in Christ’s death – means that we end up actually in the same place as God in Christ: ‘My God, my God, why have you forsaken me?’ And, according to Zizek, those who are thus true Christians are those who have embraced this abandonment by God and gathered as the church, the ‘Holy Ghost community’ to live out the radical implications of that death… it is this human community that is the resurrection of God.

This connects with his extension of the old adage that ‘God became man in order that man could become God’ into a completed loop:

‘God became man in order that man could become God in order to become man.‘

The goal of our faith is thus to do as God did, and die to divinity in order that we might become more fully human.

Indeed, they were equal in their irritation that so much of philosophy has simply rejected theology as a serious pursuit. I’d agree with this. It’s time for people to stop being so shy of faith – whether arguing about it from a position of agreement or disagreement.

Let’s dismiss our embarrassment about our religious pasts and talk frankly. In particular, we need to talk about what a community living this Zizekian Christianity might look like.