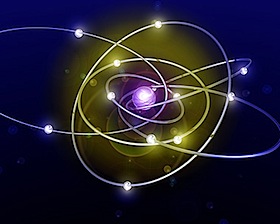 As exemplified by the arguments that science writer Philip Ball has stoked up by daring to criticise The Reason Project (Dawkins, Hitchens, Harris et al.), there are those on both sides who are desperate to draw ever harder lines between science and religion.

I strongly believe that these lines are far softer that perhaps we’d like to think, and what I’d like to do in the following few posts is hold up some pointers as to why that might be the case. Before I get to the meat of this first post, I want to make something clear: I don’t believe that Quantum Physics provides any proof of God. I don’t think a ‘God Particle’ will be discovered. What I think the new physics does do though, is force us to think more carefully about what we think we know, whether we be scientists or theologians or both.

One book that I have mentioned here before and which I thoroughly recommend to those interested in taking things further is Quantum by Manjit Kumar. In it he outlines the argument that blew up between Einstein – who ironically began the whole quantum school of thought – and Niels Bohr – who was the foremost proponent of radical quantum theory. The argument was important because it centred on what the nature of reality was. And what can be more important than that?

Historically, classical physics was optimistic about understanding matter. Physicists believed that as technology and experimental equipment improved they would eventually be able to look an atom, or a subatomic particle even, straight in the eye. It was simply a question of more accurate observation and measurement. However, in 1926 a quantum-leaning physicist called Werner Heisenberg outlined what has become known as the ‘uncertainty principle’. This states that it is impossible to know both the position and velocity of a particle simultaneously. Simply put: in order to observe a particle a measuring instrument has to get some information from it. At the limit of observation, this can be done using one single photon of light, which bounces off the particle being observed and is then registered by the instrument. Under normal circumstances – like reading a thermometer – this is fine. But when the particle you are observing becomes so small, the impact with the photon actually changes the momentum of the particle. Your observation of it has actually changed it in some way.

This precipitated a huge crisis in physics. If Heisenberg was right, was it even possible to observe or measure anything accurately? On the one hand, Niels Bohr became more convinced that atoms and subatomic particles could never be modelled in terms anything more than metaphor. There was nothing but abstract mathematics at the core: no ‘orbiting particle’ model, no ‘plum pudding’ model; we would never be able to draw what an atom actually looked like. Everything was uncertain, shape-shifting wave functions that ‘collapsed’ into states we were looking for when we wanted them to. Einstein resisted this. He was convinced that the quantum concept would be superseded by something more fundamental, a model that would describe everything properly, and would be understandable in a physical way. For Einstein, real things did exist. For Bohr, they existed only when we observed them.

What are the implications for theology? Primarily, I think the argument between classical and quantum physics parallels quite nicely with the interaction between ‘classic’ and ’emerging’ church. My experience in the 90’s, with Toronto etc. was that people in the charismatic, evangelical wing of the church really believed that they would soon achieve total immanence with God. God was almost touchable. If only we could sing that bit harder and be zapped that tiny bit more we would actually achieve full communion. When this didn’t happen, it precipitated a crisis among many of those of my generation. We felt cheated, and retreated into ‘alt.worship’ where we explored a ‘quantum theology’ where God was pure equations, transcendent and immensurable.

It seems now that both positions are wrong. While Einstein is yet to be vindicated, most physicists are skeptical about the ‘hard’ quantum model, and feel that some new theory will supersede it, even though Heisenberg’s principle is unbreachable. God, I think we are learning again, is both immanent and transcendent, but never entirely one or the other. Uncertainty remains.

And so it is with all our knowledge. Those on the side of The Reason Project will want to claim hard facts and cold truth, as will those on the side of fundamentalism. But it doesn’t take a genius like Einstein to see that human experience has always been far more comfortable in the uncertain place in between these positions, and it’s to that uncertain place that I want to go in the next post, where we’ll take a look at other dimensions.